By tauseefanwarMarch 3, 2018No Comments3 Mins Read 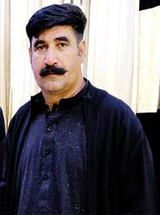 Syed Akhunzada also famous as Syed Akhunzada Chitan, is a Pakistani politician.He served as member of the National Assembly of Pakistan. Having affiliated with the Pakistan People’s Party ( PPP) since student life, Syed Akhunzada alias Chattan is proud of contesting the February 18, 2008 election in NA-44 (Bajaur Agency) constituency on the PPP ticket.Born in Amankot, Bajaur Agency, Akhunzada after graduation from the Bajaur Degree College, Khar, got admission in the Fine Arts Department of the University of Peshawar in 1990 and at the same time remained active leader of the People’s Students Federation (PSF). He was the president of PSF Malakand division in 1985 and was elevated to the position of PSF provincial chairman in 1993.His father was one of the senior leaders of the PPP but he is now spending most of his time in ‘tableegh’ (preaching). Chattan, an amateur painter and artist, has also spent 40 days in preaching.[1]  Biography

Akhonzada Chitan was elected to the National Assembly from Constituency NA-44 as an independent candidate in Pakistani general election, 2008.he is also struggled for the seat of National Assembly from Constituency NA-44 as a candidate of Pakistan Peoples Party in Pakistani general election, 2013 but was unsuccessful and lost the seat to Shahab Uddin Khan.[2] Career

Akhunzada wants the Political Parties Act extended to the Federally Administered Tribal Areas and recommendations of the Frontier Crimes Regulation (FCR) Reforms Committee implemented forthwith. He says the British-era laws and administrative system in the tribal areas were one of the reasons for unrest in the tribal region. Until and unless the tribesmen are given their constitutional and legal rights, a sense of deprivation would prevail among them, he believes.A true worker of the PPP, he says, he would support the party even if it preferred to sit in the opposition.