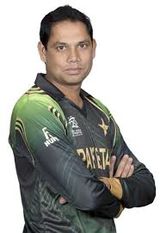 
Zulfiqar Babar is a former Pakistani slow Left Arm orthodox-spinner. He is the son of former Pakistani footballer Abdul Ghaffar. It took Babar very long to play for Pakistan. He represented the Pakistan cricket team in all formats, but he is known for as a test player. He did not play for longer but was a consistent bowler with a wicket to wicket line and length. Zulfiqar could turn the ball sharply at any pitch, which offered some turn. Babar played for Pakistan from July 2013 to November 2016. This article has all the information about Babar, including Zulfiqar Babar Biography. Zulfiqar was a very skillful and economical test match spinner. He played in 15 tests for Pakistan from October 2013 to November 2016. At that time, he took a total of 54 wickets in 28 innings. Babar had a bowling average of 39.42 and a strike rate of just over 82. He took two fifers in his Test career as well. He also scored a half-century in tests with a total of 144 test runs in 18 innings at an average of 16 runs per innings. Babar also played in limited-overs for Pakistan and appeared in five One Day Internationals and seven T20 internationals. He has a total of four ODI and twelve T20 wickets in his account.

Zulfiqar was born on 10 Dec 1978 at Okara, Punjab. Currently, he is residing in the same with his family.

Zulfiqar is the son of former Pakistan’s football player Abdul Ghaffar, who played one match for Pakistan. He became the first cricket from Okara to play for Pakistan.

Babar made his ODI debut against Australia on 7 Oct 2014 but only played four ODIs. He holds the record of the oldest Pakistani to get 50 test wickets.