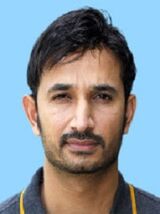 
Aizaz Cheema is a former Pakistani cricketer who served as a right-arm medium-fast bowler in the national team. He is famous as a sensible bowler in do and die situations. His aggressive bowling has always resulted in dismissals of batsmen. On many occasions, Aizaz defended small scores in the last overs and surprised the opposition by winning difficult matches for his team. This article has all the information about Aizaz, including Aizaz Cheema Biography. Aizaz was born on 5th September in 1979 at Sargodha, Punjab. Currently, he is living in Lahore.

He got his early education from divisional public school, Model Town Lahore. He completed his graduation in Bachelor of Commerce (B.com.) from Punjab College of Commerce. Aizaz has also done his qualification in ECB’s Level 2 Coaching.

He belongs to an educated family. His father served as a professional lawyer while his mother served as a teacher. His father wanted Aizaz to be a banker but then permitted him to play cricket under the condition of continuing his education. Aizaz married to a girl named Sheema and has two children, a daughter and a son name Arisha and Irtaza.

In 2012 he added in Asia Cup, held in Bangladesh. He destroyed Sri Lankan’s batting line and took eight wickets in a match. Aizaz Cheema also showed his aggressive bowling against Bangladesh and got nine wickets. He got the reliable player award for his last over against Bangladesh in final match innings in which he defended 3-runs and resulted in Pakistan’s win.

Aizaz is looking forward to coaching through his experience, and he has also completed ECB’s Level 2 Coaching course and continuing ECB’s Level 3. He also performed as a mentor for the PIA team. He has been looking for club coaching to improve his skills to get opportunities in PCB.