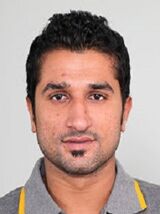 
Bilawal Bhatti is a Pakistani international cricketer who is an all-rounder. He is a right-hand batsman as well as a medium-fast bowler who showed his exceptional batting skills and had an excellent controlled line and length in bowling with quick wicket-taking ability in domestic cricket. This article has all the information about Bhatti, including Bilawal Bhatti Biography. Bilawal studied at a school in his hometown Muridko, Punjab. Later he didn’t continue his studies.

Recently Bilawal got married to a girl who belongs to Lahore named Sahira Riaz.

In 2017, Bilawal selected in Karachi kings and proved himself a promising all-rounder for the franchise. Bhatti added in 3rd season of the PSL in Lahore Qalandars but dropped due to his shoulder injury. Currently, he is playing for Multan Sultan. He took his best bowling by representing Multan Sultans with three wickets against Quetta Gladiators.