By tauseefanwarMarch 15, 2018No Comments2 Mins Read 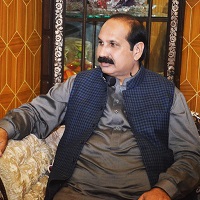 Ali Bhatti is a Pakistani politician who served as a member of the National Assembly for 2 times. He is incorporated with Pakistan Muslim League N for quite a long time. Bhatti is a resident of Sargodha from where he contests the elections.

He contested Pakistan General Elections in 2008 from NA-67 Sargodha Constituency while being appended to Pakistan Peoples Party. However, he lost the seat from his opponent.

In 2013 he again ran for the seat of the National Assembly after joining Pakistan Muslim League N from the Constituency NA-67 and won the seat. He defeated his candidate by attaining 109,132 votes. After taking an oath, he held important ministries till the completion of his tenure.

In 2018 General Elections he again managed to garb the National Assembly seat, but it didn’t last for long. in 2019 his opponent Aamir Sultan Cheema challenged him in court due to which elections re-held. On 2nd February 2019, he again contested for the same seat with the same opponent but unfortunately lost it.