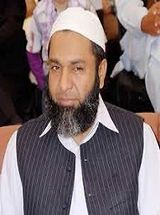 Chaudhry Hamid Hameed is a Pakistani politician.He was elected as a member of the National Assembly of Pakistan (MNA) from June 2013. Ch. Hamid Hameed is of great importance to the PMLN and one of the highly respected members of the party.Chaudhry Hamid Hameed is a qualified politician and belongs to a respectable family.Chudhary Hamid Hameed is the Member of National Assembly of Islamic Republic of Pakistan of NA-66(Sargodha-III), This member belongs to Abdul Hameed family, which is one of the powerful as well as the honest family in NA-66(Sargodha-III). Chudhary Hamid Hameed is the very honest person as well as educated person, And now serving as Member of National Assembly of the Islamic Republic of Pakistan.[1]  Biography He served as Mayor of Sargodha.

Hamid’s career in politics began when he decided to join Pakistan Muslim League (N) in 2002. He was given the ticket to contest elections in that same year. Being his first experience in the elections, he wasn’t able to emerge victorious and hence lost the opportunity to become a member of National assembly.[2] Election Results 2002

In the next elections, in 2008, it came as no surprise when he was given the ticket to contest in the elections. Unfortunately he was defeated by his rival this time around too and couldn’t secure a place in the National assembly.[3] Election Results 2008

Due to his previous success, in 2013 when he again won the election in NA 66, it didn’t come as a surprise to anyone and thus he retained his seat as the member of National assembly. He was rewarded for his hardwork by being appointed as Federal Parliamentary Secretary for Kashmir Affairs and Gilgit Baltistan.[4] Election results 2013