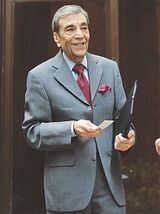 
Zia Mohiuddin is an international artist who is a British Pakistani actor broadcaster and poet. In his artistic career, he has worked in such famous movies that earned him great fame and support for his career. He is also considered as a respected name in the world of theatre. One of his niece Ainy Jaffry is a notable name of the Showbiz industry. This article has all the information about Zia, including Zia Mohiuddin Biography. Zia is widely known for his famous roles in Julies Caesar, Long Days Journey into Nights, A passage to India, and many more. As he was trained in the Royal Academy of Dramatic Art in London, he soon made wide fame both in theater and on screen. He successfully developed his artistic talent in his career and presented it to the people. Zia also played a key role in the Pakistani film industry and T.v. He worked in the key T.v Shows and movies in Pakistan when he was called by Bhutto. It is said that he has worked for more than 45 years in England.

He was born in a family of Haryana, India. His father, Khadim Mohyeddin, was a mathematician, musician, and playwright. He was also a famous lyricist and associated with Theatre. He married Azra Mohyeddin. He also married Naheed Siddiqi, who worked with him in P.I.A Dance Academy Karachi. His sons are Risha, Minos, and Hasan Mohyeddin. His daughter is Alia Mohyeddin. He also has grandchildren. They are Fatima, Maya, Tarun, Maleeha, and Shayan Mohyeddin. His nieces Ainy Jaffry and Maher Jaffry, are famous Pakistani television starts.

The father of Zia was associated with theatre and art. It provided him a strong background in art. After spending his early life in Kasur, he went to England to pursue a career as an artist. Soon he started training in the Royal Academy of Dramatic Art in London for four years, where he developed his talented artist in him.

Zia has immensely contributed to the world of art. He is an internationally recognized name due to his services as an actor, director, producer, and reader. In Musharraf’s regime, he was awarded Sitara-e- Imtiaz in 2003. In 2012, he was awarded again by the Government of Pakistan with Hilal-i-Imtiaz upon his services. Recently, in 2017, The Pakistani Community in Dubai presented him with a Lifetime achievement award in Dubai. The Pakistani Ambassador in Dubai gave the award.