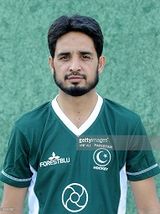 Zeeshan Ashraf Qasmi is a former Captain of Pakistan’s field hockey team. He played on the defender position in the team. He captained the Pakistani Hockey team in the 2008 Summer Olympics Games held in Beijing. Zeeshan also led the national team in the 2010 Hockey World-Cup held in India.

Moreover, he made his debut in the year 2001. Under his leadership, Pakistan won its first Gold Medal in 201o Asian Games after a gap of two decades. This article has all the details about him, including Zeeshan Ashraf Qasmi Biography.

Zeeshan is a well-known name in the field of Hockey who has attained various achievements since his debut. He took inspiration for playing this game from his family, who used to play Hockey at an early age. He has played on an international level and surpassed various games with his dedication and hard work.

Zeeshan is indeed one of the biggest players of hockey this country has ever produced.

He was born on 28th February 1977 at Quetta, Baluchistan.

He got his matriculation from Islamia High School Quetta, Baluchistan.

His father worked in Quetta, so he grew up in Quetta. He is married to a girl named Fatima Hussaini and has two daughters. He has shifted to Faisalabad, his forefather’s hometown.

Zeeshan started playing Hockey from his childhood in his hometown at Quetta. He was inspired by his elder brother, who would play Hockey when he was a child, so he started his Hockey at the age of 16 years and made his debut for Pakistan in 2001.

Zeeshan initiated his international career in field hockey in 2001. He got many good performances in his career that lasted till the year 2010. Qasmi captained the Pakistani Hockey team in different competitions, including the 2008 Olympics Games, 2010 Hockey World Cup and Asian Games 2010.

He led the Pakistan Hockey team in winning their first Gold Medal after a long wait of 20 years. Moreover, he was part of the team when they won the Silver Medal in the Asia Cup. He had a terrible experience of leading Pakistan in the hockey world cup as the team stood at the 12th spot out of 12 teams.

Zeeshan also participated in the 2004 Olympic Games and 2006 Commonwealth Games.