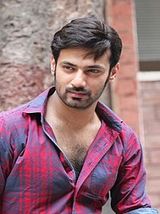 
If talent had a face then it would definitely look like Zahid Ahmed who besides all the ups and downs of life never lose hope and through his struggle, he became an inspiration for millions of people. He is one of the successful actors of the Pakistani showbiz industry and is improving with each performance. This article contains detailed information about him including Zahid Ahmed Biography and Zahid Ahmed Dramas. He is a delightful and irresistible actor who is fully devout to his career and is popular among people because of his melodic and sweet-sounding voice. Whatever he has achieved today is the result of his diligence of many years. He is indeed an inspiration for so many people who lose hope after failure. He has worked as an RJ and in theater in the past. He is married and is blessed with 2 sons.

He was born on 20th September 1984 in Karachi, Pakistan. Currently he still resides there with his family.

He holds the degree of Graduation in Marketing that he attained from Preston College.

He gave a guest appearance in Faysal Qureshi’s show Salam Zindagi in which he demonstrated his life experiences, his ups, and downs of life, his disappointments, his failures, his financial issues, his marital issues, his courage, his will power, and his determination. His story inspired thousands of people and made him recognizable more.

He started his professional life by working in an IT company designated as a Chief Operating Officer in 2011. The same year he got married and went on his honeymoon trip to Malaysia but that trip proved to be disfavor for him as he came to know that the company in which he was working is a fraud. He came back to Pakistan with empty hands and an empty mind where his marital life was about to collapse. In 2012 he met with a horrible accident which results in spine damage which put him on the bed for almost 4 months.

Worked as an RJ

In 2012 he got a radio show The Bumper2Bumper Gaming Show which broadcasted on drive Fm 89.9. He got the show because of his voice but unfortunately after doing this show, his spinal got more damage due to which he had to left the show. Prior he also did a show on Fm 89 from 2002 to 2003.

In 2012 he was recommended the spinal surgery by the head of PIMS Islamabad after which he got able to move and walk finally. The same year he again got a job in the office of PTV where the Head of PTV noticed his  English and hired him full time to launch PTV WORLD the English channel but unfortunately, in 2013 the head got fired from his job and he left in the company without a boss.

In 2013 he did theater with legendary Anwar Maqsood where he played the role of Jinnah in ‘SAWA’ 14th August for which his wife also supported him. He did great hard work for that role and also lost 22kgs and went with the hair solution to get himself fit in the role. He did theater for almost a year but left that job too because of his corrupt producer and once again his fate left him on the roads of Karachi with empty hands. Prior to this he first did his theater play in 2006 in Islamabad.

After all, the miseries of life 2014 proved to be a blessed year for him as he got noticed by a lady from a production house. He called him for the auditions in which he got selected. He gave a debut on a small screen in drama serial “mehram’ in which he did a splendid job opposite Ayesha Khan. After this serial, he got recognized by many producers and directors. He was also honored with the Best Actor in a negative role Award for his acting in drama serial ‘Alvida’ opposite Sarah Khan and Sanam Jung. It wouldn’t be wrong to say that today he has achieved the heights of success with his patience, hard work and dedication.
He is a versatile actor who never afraid to accept the challenging roles and ‘Ishq Zah e Naseeb’ is proof of his versatility. He is currently busy shooting a number of projects and soon going to make a debut on a big screen.

His social media handles include