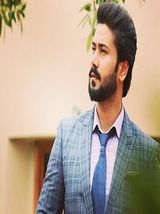 
Ali Abbas belongs to a well-known family of the Showbiz industry who has given some masterpiece to the Nation. He himself is proving his acting skills with each passing serial by doing diverse roles and is soon gonna be in the list of most successful actors of Pakistan like his parents. This article contains detailed information about him including Ali Abbas Biography and Ali Abbas Family. Ali is a committed and devoted Pakistani actor who hails from Karachi and belongs to an artistic background. He is a versatile actor who is seen performing different roles on screen and has received immense love from the people for his remarkable acting. He is indeed giving tough competition to all the actors with his magnificent performance. He had a dream of becoming an actor since childhood that didn’t fade even after his bachelor in Law.

He was born on 9th Feb 1984 in Karachi. Currently, he still resides there with his family.

He holds the degree of Bachelor’s in Law from Karachi.

He belongs to a talented and artistic family where most of his family members are part of the Showbiz both from the maternal and paternal side. His Waseem Abbas and mother Saba Hameed are conventional and established actors of the Pakistani industry for a long time. His step-sister Meesha Shafi is a notable Pakistani singer while his stepbrother Faris Shafi is an actor and a rapper. His paternal grandfather late Inayat Hussain Bhatti was an actor, director, producer and playback singer while his maternal grandfather late Hameed Akhtar was a veteran newspaper columnist, writer, and journalist. His paternal cousins Agha Ali and Ali Sikandar are also well-known Pakistani actors.

He started his career by working as a lawyer in an office but the acting was in his genes which forced him to change his profession and shift to showbiz side. He made his debut in 2014 with a drama serial “Ladoo Mein Pali’ opposite Maya Ali and Sajal Ali. He did a splendid job in his first serial after which he got more and more opportunities to work with many well-known artists including Ayeza Khan, Imran Abbas, Aiman Khan, Shehzad Sheikh, Sarah Khan, and many others. Whatever he performed on-screen he completely did justice to his each and every character whether it’s an insane Basil from ‘Khali Hath’ or whether it’s a Coward Zarbab in ‘Tum Kon Piya’ he performed every role in a fair way.