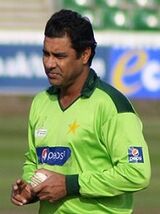 Waqar Younis is a right-arm fast bowler who is a Pakistani cricketer, Coach, and Commentator. Waqar is known for his bowling. He also has captained the Pakistan side and played for Pakistan from 1989-2003. He has many bowling records to his name. Waqar is known for his Yorkers and swing bowling in the cricketing world. Currently, he is working as a bowling coach in Pakistan’s national team. This article has all the information about Younis, including Waqar Younis Biography. Waqar opened his eyes on 16 Nov 1971 at Vehari, Punjab. Currently, he is living in Australia with his family.

Waqar got married to Faryal Waqar in the year 2000. She is a Pakistani Australian. Waqar has a son named Azaan Waqar and two daughters Mariam Waqar and Maira Waqar. Waqar and his family currently live in Belleville, Australia.

Waqar was also the captain of the Pakistan team in the 2003 world cup. In a game against Australia, Waqar bowled a beamer to Australian batsman Andrew Symonds and was removed from the bowling attack by the match officials. This world cup did not go well with Waqar Younis and Pakistan’s side as they were out of the tournament after group matches played. He soon announced his retirement from international cricket in April 2004. Waqar captained Pakistan in 17 games and won 10 games.

Waqar worked as a commentator for Australian Channel nine and UAE’s Ten Sports. He was appointed as the bowling coach in 2006 for Pakistan but resigned in 2007 to work as a commentator. Then again, Waqar was made Pakistan’s bowling and fielding coach in March 2010 and soon promoted as a head coach. He resigned from the post after Pakistan’s exit in the semi-final of world cup 2011. In 2013 he coached in the Indian Premier League for Sun Riser Hyderabad team. Currently, Waqar is working as Pakistan’s bowling coach.