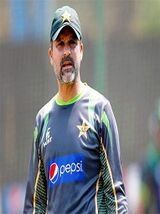 
Moin Khan is a former Pakistani Wicket-Keeper who was terrific behind the wickets. Like many Pakistani wicket-keepers, Moin was also an average player with the bat who used to compete with Rashid Latif as both were equally good for the wicket-keeper in the national team. He has served cricket in different ways. Besides, as a cricketer, he has been a coach, Chief Selector, and a manager of Pakistan cricket team on different occasions. This article has all the information about Khan, including Moin Khan Biography. Moin was born on 23rd September 1971 at Rawalpindi, Punjab. Currently, he is residing in the same city.

Khan is married to Tasneem Khan and has a son who is also a professional cricketer Azam Khan. He currently has a cricket academy in Karachi.

Moin started his professional cricket from the year 1990 and became part of Pakistan’s side as a wicketkeeper. His wicket-keeping abilities kept him in the national team for 14 years, and then he was retired in 2004 when Kamran Akmal came as a replacement for him.

He started his test career on 23 Nov 1990 against West Indies. He did not perform with bat well until in 1994 when he made a match-saving century against Australia at Lahore, and Pakistan managed to draw the match. Moin was always a hard worker and kept his nerves under control whenever his teammates struggled. In a test match against Sri Lanka when Pakistan needed 357 runs to win, he stood firm and scored 117 runs unbeaten. In the end, wickets fell regularly at the other end, and Pakistan lost the match.

He played his last international cricket on 20 Oct 2004 and later left professional cricket in 2005 and started his career as a coach.

Moin captained the Pakistan side for some games. He was leading the Pakistan team in the Asia Cup 2000 held in Bangladesh. He led from the front, and in the final tournament, he scored a quick 56 runs off 31, with this Pakistan reaching an impressive 277/4. In reply to this, the Sri Lankan side only managed 238 runs. Pakistan won the decisive final by 39 runs.

Besides playing as a cricketer on the national side, Moin served cricket with different roles. He appointed as a manager Pakistan team in August 2013 and was soon named the head coach in February 2014, replacing Dev Whatmore. He also served as chief selector of Pakistan’s national side from 2013 till the end of World Cup 2015 due to Pakistan’s early exit in the quarter-final.
Moin also coached in Indian Cricket League for Hyderabad Heroes and Lahore Badshahs. He is still connected with cricket and is working with the franchise of Quetta Gladiators in the Pakistan Super League.