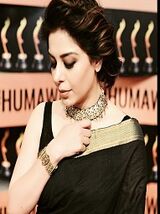 
Uzma Hassan is a Pakistani television and film actress who made her entry in the Showbiz industry by breaking her family rules. She belongs to a feudal family where no woman is allowed to expose herself. Uzma has worked in a few Pakistani dramas and always gave her 100%. This article has all the information about Uzma, including Uzma Hassan Biography and Uzma Hassan Dramas. Despite being born in a Feudal and conservative family, Uzma broke all the family rules and entered the Showbiz Industry in 2013. She made her name in the industry without her family’s support yet with the permission of her father, who stood by her side every time. Uzma planned to be in the industry just by chance and had no plans for it since Childhood. Though she hasn’t worked in many dramas, yet she never fails to give the quality work for which people cherish her. Uzma has also worked in 1 Lollywood film for which she received immense praise.

She was born on 15th June 1979 in Lahore. Currently, Uzma is residing in the same city yet often lives in Karachi for Showbiz work.

Uzma came from traditionalist and feudal family where no one can even imagine becoming part of the Showbiz industry. She was a spoiled child who loves to break the family rules, and it is how she joined industry by shattering his family’s 300-year-old tradition. With her debut serial, she had to face criticism from her family that she didn’t bother. Uzma is currently unmarried.