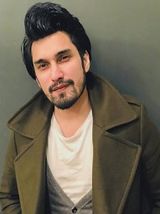 Uzair Jaswal is a talented and versatile Pakistani singer, songwriter, composer, actor, and model. He is one of the most significant assets of the industry, who is unstoppable like his brothers Umair Jaswal and Yasir Jaswal. He has marked his name in Bollywood too. This article has all the information about Uzair, including Uzair Jaswal Biography, Uzair Jaswal Family, and Uzair Jaswal Songs. You might be familiar with the name Umair who is one of the leading singers of the Pakistani industry. Apart from an incredible singer, he is likewise a fantastic Singer, Songwriter, Model, and an Actor. He is a multi-talented man who is recognized internationally, too, after he made his Bollywood debut in 2015 as a playback singer. He blessed with good looks and talent that make him the superstar of the industry. The passion for music runs in his genes.

He was born on 22nd November 1992 in Oregon, United States. He has overseas Nationality too. Currently, he is living in Islamabad with his family.

He has a degree of Bachelor that he obtained from the University of London.

Uzair belongs to an educated and Talented family. His father was a scientist by profession while his mother is a Housewife. One of his elder brother Umair Jaswal is the biggest name in the field of music. Umair is equally talented and a versatile personality who is also a songwriter, model, and actor. His other brother Yasir Jaswal is not a singer, yet he is a music director and even got an award for directing soulful music.

Uzair started his music journey a long time ago when he was hardly 14 years old. He went on with a dream of becoming one of the lead singers of Pakistan. As a songwriter, he made his debut at the age of 16. He has given incredible and hit single to the industry incorporating ‘Tere Bin,’ ‘Bechara Dil,’ ‘Sajna,’ and many more. He made his Coke studio debut as the youngest debutant in the seventh season when he was hardly 21 years old. Despite his younger age, he surprises everyone with time with his talent and hard work. He often was seen doing live concerts in various cities of Pakistan.

He didn’t bound himself to sing. In 2010 he made his debut as an actor in the Pakistani movie ‘Slackistan’ along with Ali Rehman and Osman Khalid Butt. Though he performed a supporting role, yet his acting was worth recognizing. After his debut movie, he was seen in other Pakistani movies too including ‘Gol Chakkar,’ ‘Jalebi,’ and ‘Oye Kuch Kar Guzar.’ He made his small-screen debut as an actor in the drama ‘More Saiyyan’ opposite Kinza Hashmi where he portrayed the role of the lead actor.

Umair also got an opportunity to introduce himself in Bollywood. In 2015 he got a chance to make his debut as a playback singer in the song ‘Tere Bin Nahi Lage Jiya’ of movie Ek Paheeli Leela.’ The song got huge acknowledgment and praise. Later, he also got an offer to compose a few other songs, including ‘Bechara Dil’ and Sajna.’