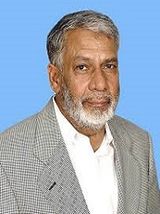 
Usman Ibrahim is a Pakistani politician who is associated with Pakistan Muslim League N for a long time. He is one of the educated Politicians of Pakistan who has done Barrister at Law from  London University. He served as a Minister of State for Human rights likewise the Minister of State for Law and Justice. This article contains all the information about him including Usman Ibrahim Biography. He is a Pakistani Politician who is a part of Pakistan Muslim League N since the day he joined Politics. Currently, he is serving as a member of the National Assembly of Pakistan after getting victory in the General Elections 2018. During his political career he also performed his duties as a Federal Minister for Defence Production, Minister of State for Human Rights and likewise Minister of State for Capital Administration and Development.

He was born on 1st September 1939 in Gujranwala where he grew. He lived abroad for his education too. Currently, he resides in Gujranwala with his family.

After completing his schooling from Gujranwala he went to the Government College University Lahore from where he did a bachelor’s. For Law graduation, he went to the University Law College. Currently, he holds the degree of Barrister at Law which he attained from Lincoln’s Inn.