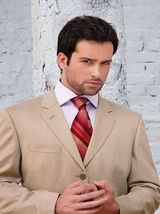 
Abdullah Ejaz is a handsome Pakistani model and an actor who is one of the most loved celebrities of Pakistan. He joined Showbiz a long time ago and over all these years he has achieved the height of success with his talent and hard work. This article contains a blend of information about him including Abdullah Ejaz Biography, Abdullah Ejaz Family and Abdullah Ejaz Dramas. Abdullah is a commemorate Pakistani model turned actor who stepped into the Showbiz industry after the footsteps of his uncle Allaudin who is a well known Pakistani actor. He is a tall, handsome and fair complexion man who lets every other girl fall for him. He has earned a huge amount of love and fame over all these years with his diligence of day and night due to which he is being recognized internationally too.

He was born on 10th June 1983 in Lahore where he spent all his life. Currently, he still resides there with his family.

He was born into a Kashmiri descent which is the real cause of his beauty. His Paternal grandfather Riaz Ahmad ‘Raju’ was likewise in the Showbiz field and served as a director and producer of the 60s and 70s while his maternal uncle Allaudin was a Pakistani actor who has worked in various Lollywood movies. He is married to Sidra Zaheer and is blessed with 2 Sons.

He is a top and excessively one of the hot models of the Pakistan style industry who has worked with almost every top-class fashion designer of Pakistan including HSY, Saniya Maskatiya, Faraz Manan, Nomi Ansari, Omer Farouk and some more.  He has likewise done numerous photoshoots as a model and has been the face of many top planner brands. He has additionally shown up in various Television advertisements. His hard work really paid off when he won the Best Male model award in Lux style awards opposite so many handsome and versatile models for the first time.

He made his acting debut in 2011 in a drama serial ‘Nail polish’ opposite Rahma Ali, Usman Peerzada and Humaira Ali as a supporting character. Afterward, he got a number of offers to work in serials from different directors. In 2015 his drama serial ‘Piya Mann Bhaye’ starring Ushna Shah, Sami Khan, and Rubab Hashim received a tremendous response from people everywhere. His next serial ‘Maike Ko Dai do Sandes’ proved to be another masterpiece by him. In 2016 he worked in a drama serial ‘Tera Mera Rishta’ opposite the models of the industry including Marjan Fatima, Farwa Kazmi, Alamdar Khan, and Shahzad Noor. In 2018 became a part of GEO drama ‘Silsilay’ with Junaid Khan, Muneeb Butt, Momal Sheikh, and Hiba Bukhari.