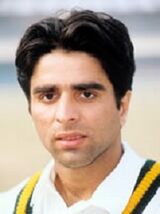 Taufeeq Umar is a former Pakistani test cricketer who was a defensive opening batsman from Pakistan’s side with a good temperament. Occasionally he also kept behind the wickets and played long innings and made a hundred in his first match. Taufeeq played in both Tests and ODIs as a national cricketer. Recently he tested positive for the Covid-19 and thankfully has recovered after two weeks of isolation. This article has all the information about Taufeeq, including Taufeeq Umar Biography. He was born on 20th June 1981 at Lahore, Punjab. Currently, he is residing in the same place.

Taufeeq started his professional cricket career when he was just 15 years old. He played under-15 world cup and played his role to help Pakistan reaching in the final. He also joined LIST-A cricket from 1997. In 2001 Taufeeq was selected on the national team.

He was dropped many times from test format as well as in ODIs. He only missed two tests from 2001 to 2004, and in this period, he played 8 ODI matches in a row, then occasionally, he was given a chance in ODI. He recalled in 2010 and proved his section right for the national team. He played his last ODI in 2011 against Ireland and represented the test team till 2012 and again was dropped. In 2014 he came back in Test and played a single match. After that, he was never given a chance in international cricket.