By nida.marriyumOctober 26, 2018No Comments4 Mins Read 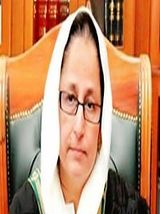 Syeda Tahira Safdar is a Pakistani judge who is currently serving as chief justice of Balochistan.  In the history of Pakistan, she is the first ever women to serve as chief justice in any court. Chief justice of Pakistan, Mian Saqib Nisar nominated her on 23 July 2018 and her appointment was approved by the judicial commission of Pakistan and she will serve at this prestigious post till 4 October 2019.
Amazingly she has the honor of being the first women in her every posting at the provincial level. Like in 1982 she became the first civil judge of Balochistan. She was born on 5 October 1957 in the capital city of Balochistan, Quetta. She is the daughter of the renowned lawyer, Syed Imtiaz Hussain Baqri Hanafi.

She got her primary education from Cantonment Public School, Quetta. Her bachelor’s degree is from Government Girls College, Quetta, and masters in Urdu literature from the University of Balochistan. In 1980, she had successfully received a law degree from University Law College, Quetta.
She had won the field of Balochistan public service commission in 1991.

She has been helping in various committees as well like as a member of the Administration Committee, the Promotion Committee and the Committee which drafts and examines the rules. These also drafts regulations, circulars, and notifications.
She was nominated as Chief Justice of Balochistan High Court by Chief Justice of Pakistan, Mian Saqib Nisar, being the most senior member of the provincial court, on 23 July 2018 and her appointment was approved by the judicial commission of Pakistan. She took oath as Chief Justice of the High Court of Balochistan on 1 September 2018. She will be serving at this prestigious post till 4 October 2019.
Currently, she is one of the three-member special court, constituted under Section 4 Criminal Law Amendment (Special Court) Act 1976, hearing the high treachery case against former dictator Pervez Musharraf which was approved by former prime minister Nawaz Sharif on 19 November 2013.

She has been part of numerous international conferences on the topic of law throughout her judicial career. In 2012, she attended a training about the International Law for Justice on Meeting International Human Rights Standards in Criminal Proceedings in Hague, Netherlands
She participated in the conference on ‘Environmental Law, 2011 Conference’ in Quetta. She also attended ‘International Judicial Conference’ in Islamabad in April 2012.
Justice Syeda Tahira Safdar attended South Asia Regional Workshop in Cybercrime and Electronic Evidence, in Colombo, Siri Lanka in August 2015. She also participated in 39th Annual Conference, under “Access to Justice –  Past, Present, Future”, on The National Association of Women Judges’ (NAWJ), at Atlanta, GA, held on October 2017.