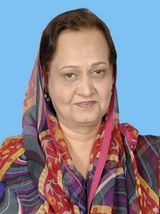 Member of the National Assembly of Muslim League Nawaz, miss Tahira Aurangzeb is one of the pioneer members of Pakistan Muslim League (N). She was elected in many departments from the seat of the member of national assembly gave out by PML-N reserved for women from Punjab in the Pakistani general election 2008. Member of the National Assembly of Muslim League Nawaz, miss Tahira Aurangzeb is one of the pioneer members of Pakistan Muslim League (N). She was elected in many departments from the seat of the member of national assembly gave out by PML-N reserved for women from Punjab in the Pakistani general election 2008.

Her schooling is from Government High School, Multan where she topped in her school in the matriculation exam. Afterwards she joined Government College Multan. Finally, she did her Masters in Political Science from Punjab University (new campus) in 1976. Dr. Anwaar Syed, Head of department of  International Relations at Punjab University, inspired her as a teacher and she learnt a lot from him.  Earlier in life, she aspired to become a doctor but ended up in politics.

She joined politics during the last days of Ayub Khan’s rule. She belongs to PML (N) and she has a rich portfolio of responsibilities.

This speaks volumes of her devotion and dedication towards her party. She used to love watching movies, and she liked Sabiha and Santosh so much that when they ended their careers, Ms. Tahira stopped watching movies. By the same token, she left watching cricket when Javed Miandad retired. She likes reading books. Nasim Hijazi’s “Aur Talwaaar Toot Gyi” is her favourite. She has read it many times. She also likes Shakespeare, Razia Butt, Salma Kanwal, A R Khatun. Her favourite magazines were “Chattan” and “Tanzeem”. Among the poets she likes Williams Wordsworth, Ghalib, Faiz, Mir Taqi Mir, and Daagh Dehalvi. She loves songs and regards Lata, Nur Jehan, Mehdi Hassan, Talat Mahmood and Mukesh as her favourites. She does not use internet. When asked which birds or animals she likes, she told us that She hates to see birds in cages. [1] likes

She places Nawaz Sharif very high. Internationally, she is impressed with Gordon Brown (UK) and King Abdullah. During her childhood, she drew inspiration from Air Marshal Asghar Khan. She deems unemployment and inflation as major problems in our country that are resulting in suicides and divorces and other social evils. She urged the young folks to get a thorough understanding of Islam. She, herself, is very much inclined towards her religion.

MNA Tahiras Stance on Rise of Divorce in Pakistan

Pakistan Muslim League (N) member of the National Assembly Tahira Aurangzeb passed her statement to the National Assembly on Nov 2016 that gas load shedding is one of the major reason behind the rising number of divorces in Pakistan. She told the lower house that arguments between couples have become routine because wives are unable to prepare food on time for the household because of gas load shedding. At Last, their husbands get angry and a couple getting separated as a result, Aurangzeb claimed, adding the gas load shedding has created a real threatening thing. She also asked the government about the report on the multi-billion dollar Iran Pakistan (IP) gas pipeline project & demanded the house be updated on it. She said that the government would win next general elections in 2018 on the basis of its performance. The Pakistan Muslim League (N) government had worked in the four years and finished major challenges which were being faced in 2013 while talking to PTV. She said law and order condition had worsened and power load-shedding was at the major problem when the Pakistan Muslim League (N) government came into power. The government with its hard work and effective measures managed to address the issues, she said adding that power plants were established to overcome power load-shedding in the country. She also said that peace was restored from Karachi to Khyber Pakhtunkhwa (KPK) and armed forces of Pakistan played the significant role in it. Tahira Aurangzeb said the people of the country had right to bring change in the government through votes in the elections. To a question, she said, to ensure holding of general elections on time, delimitations bill should be passed from the Senate at