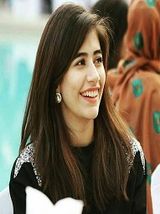 
Syra Shehroz is an alluring and versatile Pakistani actress, Model and a Vj who is the part of Showbiz since 2011 and has won the hearts of millions of people with her beautiful smile and a charming personality. She got married to a Pakistani actor Shehroz Sabzwari in 2012 but unfortunately both parted their ways. This article contains all the information about her including Syra Shehroz Biography, Syra Shehroz Family and Syra Shehroz Dramas. Syra who is also known as Syra Yousaf Khan is a stunning Pakistani actress and a model. She has also functioned as a VJ at the start of her career. Who knew that this young girl who gave her first appearance at a young would come this far without having any artistic background. She is a strong independent woman who is vigorous, compatible and talented. Syra is one of those actresses who got an offer from Bollywood which she politely refused.

She was born on 20th April 1988 in Karachi, where she spent all her life. Currently, she resides in the same city with her family.

Syra did her schooling from Institute of Learning & Motivation (ILM), Peshawar.

She was born to a Pakistani father Mohammad Yousaf while her mother hails from Afghanistan. Her elder sister Palwasha Yousaf is a fashion and hairstylist while her other sister Alishba Yousaf is also a part of Showbiz. One of her sister Ruqqaiya Yousaf died in 2013 due to cancer. She got married to a Pakistani actor Shehroz Sabzwari in 2012 in a family event who is a son of a legendary actor Behroze Sabzwari and Safeena Sheikh. The couple blessed with a daughter Noreeh Shehroz.

On 29th December 2019, news circulated on social media about the separation of Syra and Shehoze that sadly turned out to be true. Both gave a chance to their relation by getting separated for a few months. However, that didn’t turn out well, and both revealed the final decision of their divorce on 29th Feb 2020.

Syra started her career as a Video Jockey at MTV Pakistan where she got an offer to host a show ‘Bheja Fry’. Afterwards she hosted ‘Most wanted’ then moved herself to the acting side.

Other than an actress she is also a stunning model who has worked with many brands and has walked on ramp several times for various well-known designers. She often does bridal shoots where she looks incredible. She likewise has been seen in various Television commercials as a brand Ambassador also. She walked on the ramp with Kent S. Leung (her costar of movie Chalay that sath) at QMobile Hum Bridal Couture Week 2017 for Uzma Babar.