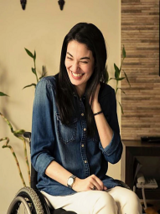 
Muniba Mazari is a Young, Independent, and Courageous Public Figure who got immense fame for being an exceptional motivational speaker and representing her homeland on various platforms. Muniba is a single parent who didn’t let her disability become a burden for her. Due to her bravery, she became the goodwill ambassador of the UN. This article has all the information about Muniba, including Muniba Mazari Biography and Muniba Mazari Family. Muniba is a synonym of fearlessness and bravery who, in spite of all the obstacles that life put on her way, stood up and made her place in everyone’s heart. The tough time that she has faced in her life made her strapped and sturdy. Muniba is a brilliant Painter, an amazing Motivational Speaker, and also works for Tony and Guy despite being in a wheelchair for a long time. Mazari is running her own brand with the name ‘Mazari’s Canvas’ and don’t miss a single day without impressing every soul with her consistency and determination. She is living with her adopted son Nael Mazari.

Muniba was born on 3rd March 1987, in Rahim Yar Khan to a conservative Baloch family.

During his intermediate Muniba got married to a former Pilot. However, it is said that she has a degree Bachelors in Fine Arts.

Muniba opened her eyes to a conservative and traditionalist family where woman are not allowed to be a public figure. Her family’s tradition killed her dream of becoming an artist, but destiny decided something else for her. Mazari got married to a former Air Force Pilot when she was only 18 years old. He divorced her after knowing about her disability, but the divorce changed her life in the best possible way. Muniba is living with her adopted son Nael Mazari.

While she started painting on her death bed, she decided to make painting her actual career. Muniba launched her own brand named ‘Muniba’s Canvas.’ She has involved herself in many Art exhibitions where she displayed her work nationally and internationally too. She also did her Artwork for charity purposes. Her first-ever international exhibition took place in Dubai that was hosted by the Embassy of Pakistan. She tries to convey the message of life, dreams, and passion through her paintings. A few of her exhibition’s incorporate:

As a Motivational Speaker

Muniba has participated in multiple platforms as a motivational speaker, which became an actual reason for her acknowledgment. Once her speech on TED talks about her life journey took the world on the storm, and she received immense praise and applaud for her bravery and daring attitude. Since then, Muniba usually received an invitation to be a part of different events as a motivational speaker on the international level too. Muniba also went to the Army Public School to enhance the enthusiasm of the students, where she also sang a song.