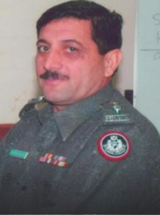 DSP Majeed Abbas also famous as Syed Abdul Majeed Abbas was born in Azad Kashmir. He moved to Karachi for his higher education and joined Sindh Police in 1984 after graduation & Played a vital role in maintaining law and order in the province. DSP Syed Abdul Majeed Abbas (“Shaheed”) was appointed as SDPO SITE, District West Karachi Pakistan. On 9 June 2015 Shaheed DSP was going to his office and on his way the terrorists attacked on him as a result he received five (05) bullet injures and he embarrassed Shahadat. An FIR bearing No. 249 of 2015 was registered under Section 302/427/34 PPC R/W Section 7-ATA, at Police Station Shah Latif Town, District Malir, Karachi. Deputy Superintendent Police SITE area Majeed Abbas, who was probing the Baldia Town Factory carnage case, was shot dead in a targeted attack in Karachi, police said.The martyred DSP was serving as DSP SITE Industrial Area of Karachi. DSP Majeed Abbas was driving a police mobile van and heading to his office when four gunmen riding two motorbikes intercepted his vehicle in Zafar Town within the jurisdiction of the Shah Latif police station and fired multiple shots at him.

“He was hit by five bullets all fired from a very close range,” said DIG-East Munir Sheikh. “The attackers most probably used 9mm pistols and rode away after the attack. Initial findings suggest that the assailants were four in number but we are not yet sure.” A day after the killing of DSP Majeed Abbas in a Shah Latif locality, police investigating the case claimed to have identified the militant group behind the attack, traced some attackers and arrested their two close associates in different parts of the city.

DIG-East Munir Ahmed Shaikh, who is heading the team of investigators, told that the police with the assistance of some eyewitnesses had prepared sketches of two main suspects.With the help of these sketches, the investigators identified both the suspects and detained two close friends of one of them, the officer said.the DIG said the assailants belonged to a militant group.

“SITE DSP Majeed Abbas had left his house in Shah Latif Town for his workplace at around 10am when four unidentified men on two motorcycles targeted him inside his police van”, Karachi AIG Ghulam Qadir Thebo said. The slain officer was among four personnel assisting the investigation officer (IO) of the Baldia factory fire case, SITE SP Sajid Sadozai.SP Sajid Sadozai had been taking his assistance,” said one of the four officers.

The DSP was critically wounded in the attack and taken to the Jinnah Postgraduate Medical Centre, where he died. Doctors said the victim was shot at least five times with a small firearm. The police did not find any empty bullet casings at the crime scene, Shah Latif DSP Fakharul Islam said. He believed the assailants took away the empties to leave no clues behind.According Police officials, the attackers belonged to the Swati faction of Tehreek-e-Taliban Pakistan (TTP).

Prime Minister Muhammad Nawaz Sharif strongly condemned the murder of DSP Majeed Abbas in Landhi, Karachi. Seeking report into the incident he expressed concern over the number of police officials targeted in Karachi in the last few weeks and directed authorities to take tangible steps to improve law and order situation in the metropolitan city and to apprehend the criminals at the earliest.

Karachi: President Mamnoon Hussain condemned the Karachi firing incident in which Deputy Superintendent of Police (DSP) Majeed Abbas was gunned down.He directed the provincial government to bring the killers of the police officer to justice.The President said that maintenance of law and order and providing protection to the citizens was the prime responsibility of the government. There should be no dereliction in this regards so that confidence of the people be restored in the government and business activities in the country’s commercial hub flourished, he added.He sympathised with the family members of the martyred police officer and prayed for the departed soul.

Islamabad, 09 June 2015: Former President Asif Ali Zardari was condemned the attack on Majeed Abbas DSP Sindh police resulting in the martyrdom. Mr Zardari asked CM Sindh to use all the resources to apprehend the killers of Majeed Abbas and bring them to justice in accordance with the law. The former Pres also paid glowing tributes to the police force which has been making huge sacrifices in fight against militants and criminals of all hue. He said we are proud of our police and law enforcing agencies and assured that the whole nation was behind them. He also prayed for eternal rest to the soul of Majeed Abbas and patience to members of the bereaved family to bear the loss with fortitude.

DSP Majeed Abbas, one of the best DSPs in Sindh police serving in Karachi was gunned down by terrorists. I as young officer learnt from him so many professional things. He was very dedicated, hard working, professional, brave and honest police officer. He was on the forefront in all missions entrusted to him and would lead his men from the front. I spoke to some officers in Karachi and all of them were in mourning. It’s an irreparable loss of Karachi police.

Two-thousand-year-old statues and coins – worth billions of rupees — belonging to the Gandhara Civilisation were recovered when the Awami Colony police foiled a bid to smuggle the artefacts in the wee hours. Sub-Divisional Police Officer (SDPO) Syed Abdul Majeed Abbas told The News that a tip-off informed them about the smuggling attempt and, subsequently, the police intercepted a container heading towards the north of the country. A search of the truck resulted in the recovery of priceless statues dating back some 2,000 years. The driver and the cleaner of the vehicle were arrested on the spot and during the initial interrogation the held men revealed that the goods belonged to two brothers named Atif and Asif Butt. [1]  Recovered Artefacts in 2012

They also said that the statues were picked up from a warehouse in Ibrahim Hyderi and were bound for Rawalpindi via Sialkot. Mirza told The News that the containers were filled with brooms, but when the police dug deeper, they found wooden boxes in which the artefacts were concealed. The SDPO said that after recovering the priceless statues and ancient coins, the police informed the Archaeology Department, which sent a team of officials to the scene. The officials confirmed that the artefacts recovered were at least 2,000 years old and belonged to the Gandhara civilisation. The SDPO added that 35 statues and 65 ancient coins were recovered, while nine of the boxes that were seized had yet to be opened.

Additional Secretary Archaeology Department, while speaking to The News, said that the police informed the department that they were about to register a theft case. However, Director Archaeology Department Qasim Ali Qasim told them that the case should be registered under the Antiques Act of 1975. A team – headed by National Museum of Pakistan curators Mohammad Shah Bulhari and Ijaz Elahi – was formed to inspect the artefacts. It managed to complete around 30 percent of the inspection, while the remaining documentation and photography would be completed by Saturday (today).

News Desk adds: Meanwhile, Police Deputy Superintendent Majeed Abbas told the BBC that the artefacts are thought to come from the kingdom of Gandhara, which spanned northern Pakistan and parts of eastern Afghanistan. “These artefacts were loaded in a container – and were so heavy – we had to call specific machines and a forklift truck to offload them carefully.” Abbas said that the two men arrested told police that the artefacts were brought to Karachi six months ago for a sales deal. The deal was cancelled and the men told the police they then tried to take the antiquities to Rawalpindi. The haul included statues of Buddha, life-sized idols, bronze artefacts, utensils and decorative plaques, Qasim Ali Qasim told AFP.

Qasim believed the items were brought to Karachi a piece or two at a time and were ready for dispatch to Europe overland via Afghanistan and Central Asia. “The thieves and mafias involved in this business dig in the northwest, which is filled with Gandhara sites with little control by the authorities,” Qasim said. “They dug up ancient pieces were accumulated in Karachi and then sent to Afghanistan in the garb of a Nato vehicle when they saw Pakistan has reopened the route.” Gandhara was a Buddhist civilisation that flourished around the modern-day city of Peshawar and in parts of eastern Afghanistan.