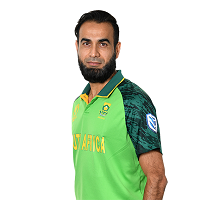 Imran Tahir is a Pakistani-born cricketer who is playing cricket for the national team of South Africa and is serving as a bowler with right-arm leg-spinner style in bowling. He has strong command on his spells, and googly is his profitable delivery in short overs and always leading him to a wicket-taking bowler.

He is known as an exciting cricket character due to his celebration run-ups, which is longer than a fast spell bowler. Tahir has a long journey of domestic cricket before international debut and is the man who played for various domestic cricket teams in the world.

Tahir also played for the Pakistani under-19 team as well as Pakistan A team. This article has everything about him, including Tahir Khan Biography. 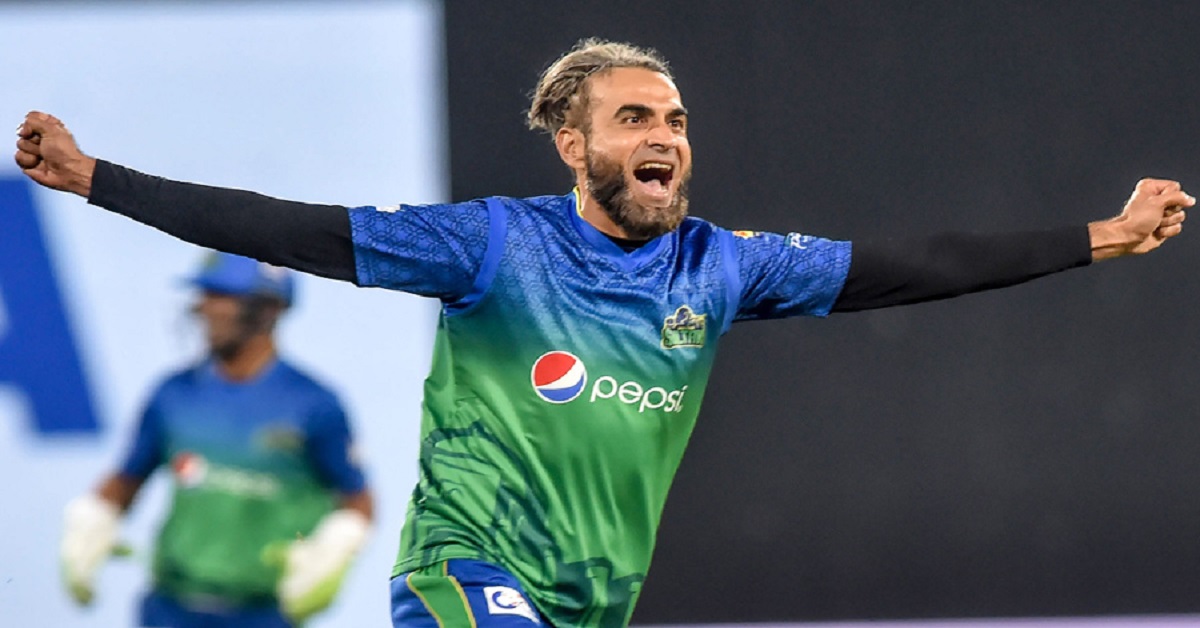 Tahir made his international debut for South Africa in ODI format at the age of 31, and played 107 matches in which he bowled in 104 innings with 173 wickets at an average of 24.83 in bowling. He has the best bowling figure of 7/45 and took three five-wicket hauls and seven four-wicket hauls.

He has an economy rate of 4.65 and took 25 catches. Tahir also batted and smashed six and 21 fours in the ODI career. After few months, he added in test cricket, and played 20 test matches in which he took 57 wickets in 37 innings with an average of 40.24 in bowling.

He has the best bowling figure of 5/32 in an innings and 8/130 in a match and claimed two five-wicket hauls and a four-wicket haul. He stroked a sir and 18 fours with eight catches in test career.

In 2013, he commenced his T20 international career, and played 38 matches in which he took 63 wickets with an average of 15.04 in bowling. He has an economy rate of 6.73 and has the best bowling figure of 5/23. Imran has claimed two five-wicket hauls and two four-wicket hauls.

He was born in Lahore city of Punjab province in Pakistan. Later he moved to South Africa.

He is the son of Atiya Tahir and Ramzan Tahir, and belongs to a Punjabi family of Lahore. Tahir was born in a low-income family, and he was the eldest son. He took responsibility for his family and started earning for survival at 16 as a salesman at Lahore’s Pace Shopping Mall.

During the under-19 world cup in South Africa, he met with Sumayya Dildar and fell in love with her. When he started playing for Dolphins, and he got married to Sumayya in 2007, and then he got permanent citizenship in South Africa.

Imran Tahir initiated his cricket career from the division team Lahore at a very early age and got selected for the under-19 team of Pakistan and Pakistan A team. He remained unsuccessful in getting attention from selectors for the national team. He continued his first-class cricket for any team in the period of 1997-2007. Tahir has participated in most years in domestic cricket and played for most teams in the world in a domestic career. He made his debut in 1996 in first-class cricket, and played 194 matches in which he took 784 wickets with an impressive average of 26.63 in bowling.

Later, he made his List-A debut in 1997 and played 239 matches in which he got 369 wickets in 276 innings with an average of 24.01 in bowling. He has the best bowling figure of 7/45 innings, with an economy rate of 4.64 and got seven five-wicket hauls and fifteen four-wicket hauls in List-A career.

In 2006 on 24th February, he made his T20 domestic debut for Lahore Lions and played 290 matches in which he dismissed 365 batsmen in 276 innings with an average of 19.85 in bowling. He has the best bowling innings of 5/23, with an economy rate of 7.00. He took two five-wicket hauls and ten four-wicket hauls in T20 domestic career.

In the 2009 Friends Provident Trophy, he represented Hampshire, and his team reached at final against Sussex, where he did an excellent spell ten overs and took 2/50 with victory in the tournament. In the same year, he remained not out while batting with a highest first-class score of 77-runs against Somerset in August’s county championship.

He was named in the Euro T20 Slam cricket tournament in 2019 and 2019 Mzansi Super League tournament for Amsterdam Knights and Nelson Mandela Bay Giants, respectively. In July 2020, was named in Caribbean Premier League for the squad of Guyana Amazon Warriors

In 2018, he was drafted in Multan Sultan for the PSL, and marked with seven wickets in three matches and did not participate in further games. In the 5th edition of PSL in 2020, he played seven matches in which he got ten wickets with a leading bowler among all spinners in the tournament. He bowled an economical spell against Islamabad by taking two wickets for 13. Tahir represented Delhi Daredevils in two seasons of IPL 2014-16, and brought in Chennai Super Kings in the 2018 IPL season. He played 55 matches in six seasons of IPL, in which he took 79 wickets with an average of 20.39 in bowling. He has an economy of 7.88 and the best bowling figure of 4/12 in his last season of IPL. Moreover, he claimed three four-wicket hauls in IPL career.

He made his ODI debut on 24th February 2011 against West Indies in the 2011 world cup held in India, Sri Lanka, and Bangladesh and emerged with an impressive performance in his debut match and got four wickets.

Tahir proved himself the best debut bowler in the world cup, and dismissed 14 batsmen in 5 matches of the tournament. He took two four-wicket hauls against England and West Indies.

He was added in the world cup squad, where he brilliantly performed for his team with his skillful pace changing bowling. He took 15 wickets in seven matches at an average of 21.53 in bowling and became second leading wicket-taker for his national team after Morne Morkel’s 17 wickets.

Tahir spelled his best bowling against West Indies with his maiden five-wicket haul ODI cricket. He played a match-winning performance against Sri Lanka and became the match’s man by taking another impressive bowling figure of 4/26. He ended 2015 year with the title of team of the year in ODI format by ICC. 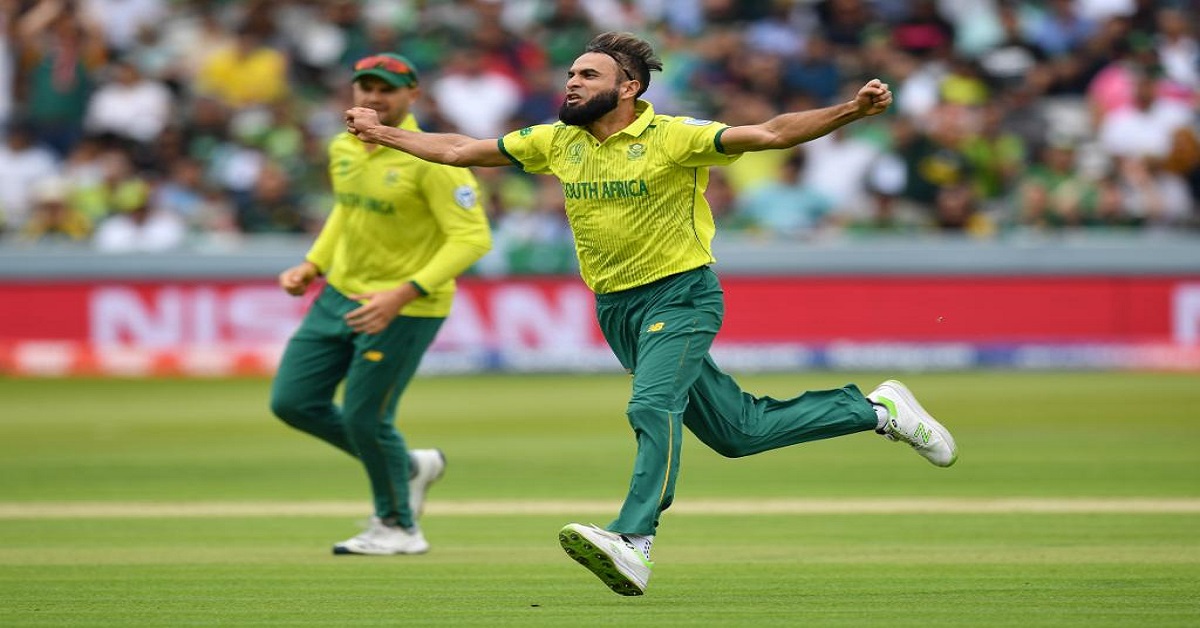 At the age of 40, he was named in the world cup squad for the national team South Africa and became the oldest cricketer who played world cup from the South African team. He ended his ODI cricket career by playing the last match of the world cup.

He played eight matches in the tournament and succeeded in getting 11 wickets with his best bowling innings of 4/29 against Afghanistan in his fifth match of world cup 2019. Later he ended his career by playing the last game against Australia on 6th July 2019.

Imran Tahir played almost against all international teams in the ODI format, and became the most successful bowler against Sri Lanka. He appeared in 15 matches against Sri Lanka and took 33 wickets with 16.12 in bowling. He has the best bowling figure of 4/26.

Tahir bowled against West Indies and got 26 wickets in 9 matches with an impressive average of 12.69 in bowling. While playing against West Indies, he became the first bowler from the South African team who picked seven ODI format wickets.

He has another notable bowling figure of 6/24 against Zimbabwe, where he dismissed 19 batsmen in 7 matches against this team in his ODI career.

He was named in the Test squad for the South African national team in 2010 against England tour, but he was quickly removed from the selection committee’s team due to his eligibility issue. Soon after a year, he became eligible, and debuted 0n 9th November 2011 against Australia in Cape Town, and got zero wickets in his first match.

In November 2012, he played against Australia and spelled 37 overs without a single wicket. Another spin bowler Robin Peterson replaced him. After that, he was recalled in the second test match against Pakistan in UAE, and he successfully got a five-wicket haul in the first innings and three wickets in the second innings.

Tahir played the last series against India, where he played four matches and claimed 12 wickets with a five-wicket haul and a four-wicket haul.

He made his debut in the national team’s T20 format on 2nd August 2013 against Sri Lanka in Colombo, where he got the most wickets against Sri Lanka in 9 matches, with an average 13.07 in bowling. In 2018, he dismissed five batsmen and became a South African bowler who took a five-wicket haul in cricket format.

In 2017, throughout his impressive performances, he placed in the top position in both T20 and ODI rankings for bowlers.

Imran was added in the world cup squad, where he took a four-wicket haul against Netherland and became the match man. He played five matches in which he dismissed 12 batsmen. He became a leading wicket-taker along with Ahsan Malik from Netherland.

Tahir was the first bowler who got four-wicket haul in three international tournaments including, world cup and champion trophy and T20 world cup. He was the only spinner who took 100 wickets in ODI from the African Nations till May 2019.

He became player of the year in T20 from the South African side in 2013. Imran Tahir is holding most wickets as a spin bowler with 61 wickets from South Africa. He became the best cricketer in the year of 2017 and named in the playing squad of World XI against Pakistan for the 2017 Independence Cup.