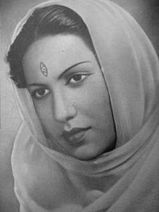 Swaran Lata was a Pakistani film actress. She started her career in the film industry in British India and later moved to Pakistan. She did her Senior Cambridge from Delhi and then joined Academy of Music and Arts, Lucknow. Swaran Lata started her career as a stage actress. Her first film was Awaaz released in 1942. Swaran Lata died at the age of 83 in Lahore on February 8, 2008. After completing her education, she joined Academy of Music and Arts – Lucknow. In early 1940’s her family was moved to Bombay. Swaran Lata started her career as an stage actress. Her first film was Awaaz released in 1942.

Sawarn Lata was born a Sikh and converted to Islam after she married Nazir Ahmed, a famous actor, director and producer at the time. She changed her name to Saeeda Bano. The Swaran-Nazir pair was a very creative ensemble, churning out many movies together both before and after Partition.In 1947, Swaran and Nazir migrated to Pakistan at the time of the Partition of India. They left everything they had behind in Bombay and shifted to Lahore. The duo had to start from scratch and in the process became one of the pioneers of the Pakistan film industry.[2] Early Life –  Early Life Swaran Lata started her career as a stage actress. Her first film was Awaaz released in 1942. Swaran and Nazir migrated to Pakistan at the time of the Partition of India in 1947. They left everything they had behind in Bombay and shifted to Lahore, Pakistan. The duo had to start from scratch and were considered among the pioneers of the early Pakistani film industry. Swaran Lata was the lead actress of Pakistan’s first ever silver jubilee film Pheray (1949). This film was a Punjabi film but she was comfortable as an Urdu language speaker who was educated in Lucknow, the home of Urdu littérateurs. For the film, she was coached in Punjabi language by Baba Alam Siahposh, a Punjabi poet, who was also one of the lyricists of the film songs.

However, it is the story of how she got discovered that Swaran tells with great passion: “I was a student at a college in Lucknow, India. When I was traveling from Delhi to Lucknow, a few film directors happened to see me. They approached me to act in films but I was not interested at first. One of them then went to my elder brother with the offer, and to my utmost surprise he agreed“.

Swaran Lata passed away at the age of 83 in Lahore on February 8, 2008. Swaran Lata had four children – Three daughters (Ismet Murshed, Iffat Rashed and Talat Abbasi) and a son (Aslam Nazir).

“After Partition, my husband and I came to Lahore and I stopped working in movies after Nazir Sahib’s first heart attack.” She is adamant about never taking up acting again, “I have retired. I’ve given interviews on TV programmes like Aap Ka Zameer by Zameer Sahib. That was an excellent interview and I enjoyed it. However, now I take pleasure in being at home with my children, grand children and great grand children.” She is not a social person by nature and happily reveals that she does not mingle with people from the film industry anymore. “I like to keep to myself,” she says. Having witnessed a huge change in the workings of cinema since she first started out as an actress, Swaran is not very happy with the state of affairs at present. “Our films had no vulgarity. They could be watched sitting with families and the story line was powerful yet simple. Everything has changed now in both the Pakistani and Indian film industries. New people have come in and everything is glamorized. The elements of nudity and heavy make-up have crept in whereas at my time, our films were successful without all of this. I don’t want to comment too much on what I think because I refuse to watch any of the latest films as it is.”[3] Last Interview of  Swaran