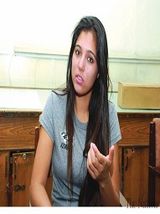 When one talks of tennis in Pakistan, one celebrity that comes to mind is Aisam Ul Haq. Fortunately, we have Sara Mehboob Khan. The 26-year old tennis player is one of the leading female athletes in the country. She is perhaps the only female athlete in the country who has represented Pakistan the most in various international tournaments. Sarah Mehboob Khan is the daughter of veteran tennis player turned coach Mr Mehboob khan. She was born on 9th of February 1991 in the city of Punjab, Rawalpindi. She holds the degree of sociology from Virginia University. Since her childhood, Sarah always want to do something extraordinary for her beloved country, Pakistan. This enthusiasm lead Sarah to chose the field of Tennis to represent Pakistan on international level and to earn pride for her country. Pakistan No 1 tennis player Sarah Mahboob Khan carved out one of the most sensational and memorable victories of her long career, as she beated Pakistan No 1 female tennis player Sara Mansoor in a thrilling final in straight sets to clinch the 5th Syed Tajammul Abbas Memorial National Ranking Tennis Championship 2015 title . The marathon final which was played  at Senator Dilawar Abbas PTF Tennis Complex  and lasted more than three hours, hats off to Sarah , who despite 1-5 down in the second set, staged memorable comeback to not only stun the crowd but also her opponent. It was highly sensation final which was witnessed by PTF president Salim Saifullah Khan and others. Sarah also took sweat revenge of her loss against same opponent in the Federal Cup final. [2] title

Sara distances herself from her father

Many would argue that Sara Mehboob got her way cut out into the national sporting arena when she began coaching under her father Mehboob Khan, former Pakistani tennis player turned coach. However, she distances herself from her father’s shadow to carve out an identity for herself. Many Pakistanis have already started putting Sara forth as Pakistan’s answer to India’s Sania Mirza.  Much like any girl her age, Sara thinks it is vital for a Pakistani, especially a woman, to voice her concerns pertaining to the civil society in Pakistan. She, along with her father, supports Imran Khan in line to become the next prime minister of Pakistan. [4] distances