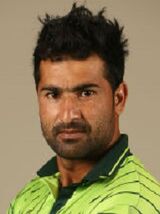 
Sohail Khan is a very talented player in the Pakistan cricket team. He is a right-arm fast bowler and can seam and swing the bowl. He is a talented bowler and has got plenty of variations in his bowling. Khan made his international debut in an ODI match on 30th January 2008 against Zimbabwe at Faisalabad, Pakistan, while his test debut came on 21st February 2009 against Sri Lanka at Karachi. This article has all the information about Khan, including Sohail Khan Biography. Sohail has been famous for his swing bowling and variations. He played in 9 tests for Pakistan and took 27 wickets in 17 innings. While he played in 13 One Day Internationals and took 19 wickets. Sohail also appeared in 5 T20s and claimed five wickets at an economy rate of 8.20. He is not seen in the international circuit for three years. He played his last test on Dec 26-30 2016 against Australia and played his final ODI match against West Indies on 5th October 2016 while he appeared in the previous T20 on 13th September 2017 against World XI at Lahore.

Sohail was born on 6th March 1984 in Sakhakot Malakand division, KPK province of Pakistan. Currently, he resides in Karachi.

Sohail was born in an ordinary family. He is the brother of Murad Khan, who works as a local actor.

Sohail has played for Karachi Kings in PSL 2016 and 2017 season. He took 16 wickets in total during the 2017 PSL tournament held in UAE. Sohail was named the best bowler in that season of Pakistan Super League due to his best bowling performance.