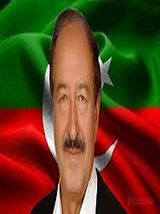 Siraj Muhammad Khan was born on 2 November 1947. He is a Pakistani politician, and parliamentarian. Khan was elected a member of national assembly on a ticket of Pakistan Tehreek-e-Insaf from NA-6 ( Nowshera) in Pakistani general election, 2013. [1] profile

Siraj was asked to resign

Siraj Muhammad Khan and other 3 MNA’s were asked to resign when Imran Khan staged a sit-in against the PML-N government and decided to resign from the National Assembly, Punjab Assembly and Sindh Assembly in August 2014.  Siraj Muhammad Khan was the fourth PTI lawmaker who had defied the party’s decision to resign.Three MNAs, including Gulzar Khan from Peshawar, Mussarat Ahmadzeb from Swat and Nasir Khan Khattak from Karak, disobeyed the PTI over resignations at the time when the party decided to tender resignations en masse. Shah Mehmood Qureshi claimed that Qaisar Jamal, Siraj Muhammad Khan and Saleemur Rehman had submitted their resignations and they were bound by the discipline of the PTI. However, all three members did not appear before the NA Speaker for verification — a big blow to the PTI parliamentary party. [2] resign

Siraj filed a plea to Speaker

PTI MNA elected from NA-6 Nowshera Siraj Muhammad Khan has submitted an application in the speaker office that he does not want to resign so the resign that was filed by the party leadership should not be accepted. In his application,Siraj Muhammad Khan said that I want to serve the people of my constituency and remain the part of the parliament,so the honourable speaker do not accept his resignation. The speaker has honoured the member’s request and ordered to keep the request in official record. [3] plea