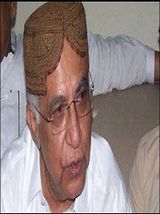 Dr Sikandar Ali Mandhro is a Doctor by profession and also a member of Pakistan Peoples Party who recently got nominated as a SEnator of upcoming Senate Elections 2018. Mr. Sikandar Mandhro is a current member of Pakistan People’s Party. He leads his constituency of Badin. Professionally he is a Doctor. Mr. Sikandar Mandhro was born and brought up in Badin on 7th of July 1943. His father’s name is Tharo Khan Mandhro, he is also an impressive figure in his area. He holds many degrees and academically is a strong person. He has done his Bachelors of Medicine and Bachelors of Surgery (MBBS) from the University of Sindh as well as Master of Arts in Economics from Sindh University and MCPS (Member of College of Physicians and Surgeons Pakistan). His primary language is Sindhi. Dr. Sikandar Mandhro lives a peaceful married life with his wife and kids. He has raised 2 kids who are honest citizens. He and his family follow Islam as a Religion. [1] Biography and Education

Dr Sikandar Mandhro is a proud politician among the ranks of Pakistan Peoples Party Parliamentarians. He is a doctor by profession and holds a highly influential position in his community. He is a leader in his constituency of Badin. His current official positions are a Minister of Parliamentary Affairs and Environment and Member of Finance Committee. He has also served at official positions previously. He has been a Member in Provincial Assembly of Sindh multiple times from 1993-1996, from 1997-1999, from 2002-2007 and from 2008-2013. He belongs to constituency PS-58 Badin-II (Old Badin-IV).  [2] Career Career In September 2017 Dr Sikandar Ali Mandhro presided about the Hepatitis Control Program in Sindh Assembly Committee room. He said that Hepatitis centres will be open everywhere for all the hepatitis patients for their health and recovery.  He said that the reason behind it is that we have started diagnosing them before that it wasn’t easy to diagnose them. As our patients are not satisfied with the treatment of hepatitis so we can’t be satisfied with it so we will arrange experts on every division who can better cure patients of hepatitis. [3] Hepatitis control program Sindh Minister For Health Dr Sikandar Ali Mandhro Confers Medals Among The Position Holders During The 12th Convocation 2018 At SZABIST Larkana Campus. Convocation was held on 27th January 2018 where he was specially invited to distribute medals among the position holders. [4] Convocation ceremony

The Pakistan People’s Party has finalised the names of its candidates for the award of tickets to contest elections on 12 seats of the Senate of Pakistan belonging to the Sindh province. The names of candidates of PPP who have been awarded tickets to contest the elections on seven general seats of Senate belonging to Sindh are: Raza Rabbani, Maula Bux Chandio, Murtaza Wahab, Ali Jamote, Mustafa Nawaz Khokhar, Imamdin Shokeen and Ayaz Mehr. The candidates awarded tickets against two seats of technocrats are Dr Sikandar Mandhro and Rukhsana Zuberi. [5] Nominated as senator