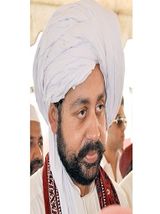 The Pakistan Peoples Party has finalised the names of its candidates for the award of tickets to contest elections on 12 seats of the Senate of Pakistan belonging to the Sindh province. Muhammad Ali Shah Jamote is also among them. Mohammad Ai Shah Jamote, who obtained a BSc degree in Agriculture Science from a college in the UK. He is associated with Pir Pagara’s Pakistan Muslim League-F and became the district Nazim of Matiari after it was separated from Hyderabad before the 2005 local body’s polls. His father  is late Sardar Syed Zulfiqar Ali Shah Jamote. Zulfiqar Shah was the 11th Jamote and his elder son Mohammad Ali Shah became the 12th Jamote. [1] Profile

Jamote belonged to the Musapota branch of the clan of Matiari Syeds who trace their family links to Hazrat Imam Musa Kazim a.s. Their elder Syed Haider Shah had migrated from Herat in Hijra 801 and settled in Matiari.

Syed Muhammad Ali shah was selected as the chief of Jamote clan in year 2011 after the death of his father. A large number of people attended the Dastarbandi  ceremony to formally install a new chief of a clan of Syed Mohammad Ali Shah, son of the late Sardar Syed Zulfiqar Ali Shah Jamote, held in his ancestral village Shah Alam Shah Ji Wasi, about 200 kilometres from Karachi. Elder relatives, chiefs of other clans, notables from across the province and friends tied the Dastar (turban) around the head of Syed Mohammad Ali Shah to express solidarity with him and to acknowledge their support. In what was described as a rare occasion, the first lap of the turban was tied by Shah Mardan Shah Pir Pagara whose friendship with the late Jamote stretched over four decades. Pir Pagara seldom attends such ceremonies. The last lap of the turban was tied by Patrick Mavros, the late Jamote’s friend of over 30 years, who along with his four sons had flown in from Zimbabwe to attend the ceremony.

Muhammad Ali Shah Jamote is awarded with ticket of technocrat seat from Pakistan Peoples Party for upcoming senate Elections which will be held in March 2018. The names of candidates of PPP who have been awarded tickets to contest the elections on seven general seats of Senate belonging to Sindh are: Raza Rabbani, Maula Bux Chandio, Murtaza Wahab, Ali Jamote, Mustafa Nawaz Khokhar, Imamdin Shokeen and Ayaz Mehr. [2] nomination