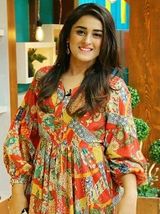 Shehzeen Rahat is a young and talented Pakistani actress and model who has worked in many hit serials and has also been seen in a few lolly wood films. She is climbing the stairs of success with each passing serial through her hard work and talent. This article has all the information about Shehzeen, including Shehzeen Rahat Biography and Shehzeen Rahat Dramas. A delightful and young girl Shehzeen is all set to be the next big thing in the showbiz industry. She is known for playing the supporting role in many commendable serials. Though she came from non-artistic background yet Shehzeen has proved herself with consistency and dedication. Her passion for acting made her a star today. Shehzeen is still unmarried.

She was born on 18th January 1989 in Karachi. Currently, Shehzeen is residing in the same city with her family.

Shehzen holds the degree of Graduation that she obtained from Karachi.

She made her debut on screen in 2014 with a comedy drama serial ‘Cheetay’ on Urdu 1 along with Mohammed Ejaz, Sonia Abbas Shah, and few others. The play didn’t give her much appreciation but she didn’t give up and was again seen next year in a serial ‘Piya Mann bhaye’ on Geo Tv in a supporting character along with many talented actors including Rubab Hashim, Sami Khan, and Ushna Shah. This serial proved to be a turning point in her career after which she got the opportunities to work in many hit serials along with many talented actors including Sana Javed, Feroze Khan, Muneeb Butt, Ramsha Khan, Uzma Gillani, and many others.

Shehzeen slowly proceeded and made herself a name on the big screen when she got a role in the Pakistani horror movie “Aksbandh” in 2016 along with Ayaz Samoo. It got positive comments from all around. She is all set to be seen in another movie Sairoz film along with Saira Shehroze and Shehroze Sabzwari which is going to be released soon.