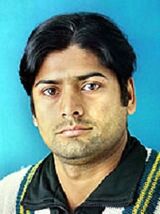 Shahid Nazir is a former Pakistani cricketer who represented the national side from 1996-2007. He is a right-arm medium-fast bowler who played in Tests and One Day International matches. He made his Test debut in 1996, after which he brilliantly performed in various matches. This article has all the information about Nazir, including Shahid Nazir Biography. Shahid represented Pakistan in 15 Test matches and claimed 36 wickets. In his 28 innings, he bowled with an average and strike rate of 35.33 and 62, respectively. His best bowling figures in Tests are 5 for 53. He has a five-wicket haul in the longer format. Shahid also featured in 17 One Day Internationals, in which he took 19 wickets. He bowled with an impressive average economy rate of 4.80 runs per over with a bowling average of 34.15 and best figures of 3/14 in a 50-overs international career.

Shahid started his professional cricket from the 1995-96 domestic season. He bowled impressively from the start of his cricketing career and called in the national team.

Shahid featured in the ICL and played for Lahore Badshahs and ICL Pakistan XI.