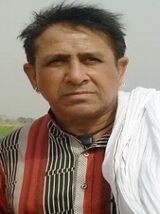 
Shafqat Cheema is a Pakistan based producer and the actor playing villainous roles in Punjabi, Pashto, and Urdu films for three decades and is considered Pakistani’s most acclaimed villain. He has worked in 80 films till now and has enhanced his fan following across the globe for his mesmerizing performance. His sons likewise belong to the same industry. This article has all the information about Cheema, including Shafqat Cheema Biography and Shafqat Cheema Movies. While some artists make their name by performing heroic roles in movies, others incline towards success by playing negative characters. Shafqat is one such actor who has made his name in the showbiz industry by doing side roles. He recognized for his ability to bring to life the personas of villains, pimps, and gangsters. He portrays his villain side so deeply and maturely, that hero can notice his presence. He has the talent to regenerate his character by adding some creativity to it. He has received all this fame, appreciation, and experience after a long and tough journey of 20 years.

Pakistan’s most acclaimed villain character was born on 20th November 1955 in Lahore.

In 1974 he completed his graduation from Jamia Naeemia, a religious institute. He is a memorizer of the Quran.

His brother Nadeem is a producer, screenwriter, and director who is known for directing various famous plays till now. His sons Umar and Shehryar are also actors and worked in the 2017 film ‘Geo Sir Utha Kay,’ which was produced by him.

His entrance into showbiz was just a coincidence; his visit to Shahnoor studio made his mind to become an actor. It took him 12 years to get the leading role in the 1989 movie ‘Kalkaa.’ Sultan Rahi was also part of this film. On his mentors’ advice, he didn’t wait for an offer of heroic roles and accepted small roles, which led him to recognition as a villain. The actual reason for his popularity is playing negative roles with such brilliance that people started hating him for that role.

Though Shafqat Cheema didn’t work in many dramas, the plays he chose to perform are worth mentioning. In 2011 he was seen in a blockbuster drama series, ‘Khuda Aur Mohabbat,’ opposite to Imran Abbas and Sadia Khan. Later he was seen in another amazing drama serial ‘Askh’ that aired on Hum Tv.

He produced film ‘Geo Sir Utha Kay’ starring Babar Ali, Nayyar Ejaz, and Rashid Mehmood in lead roles. He was also among the main cast of this film.