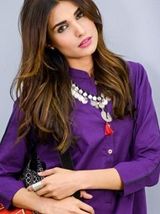 
Amna Ilyas is a talented and energetic Pakistani television actress and model who is winning hearts since 2006. She is known for portraying the role of Neha so beautifully in the film ‘Baaji.’ Amna is included in the list of supermodels of Pakistan. This article has all the information about Amna, including Amna Ilyas Biography and Amna Ilyas Movies. Amna is a young and graceful Pakistani television and film actress. She is the supermodel of the Showbiz industry who had to face great criticism at the start of her career because of her dark complexion. Amna is an energetic and confident girl who has gained tremendous popularity in all these years across the globe with her work. She has bagged various Best Model awards for her confounding work. She has a grace and an amazing screen appearance that one can’t stop gazing at her.

She was born on 11th October 1990 in Karachi. Currently, Amna is living in the same city with her family.

She belongs to a convention and a non-artistic family. Though her sisters followed her footsteps and entered the Showbiz industry as a model. Her sisters Uzma Iyas and Sadaf Iyas are struggling models and scuffling for the acknowledgment. Amna is unmarried.

Amna has attained massive popularity and acknowledgment as a model. She gave a start to her career in 2006 and like every other actor struggled a lot in making her place in the industry. She faced all the ups and down with fearlessness. Amna has worked with enormous designers and brands of Pakistan. She has worked on-ramp multiple times and has always amazed people with her graceful personality and killing attitude. Amna likewise appeared in a few Music videos including ‘Halka Halka Suroor’ with Farhan Saeed.