By zeeshanwsOctober 24, 2017No Comments5 Mins Read 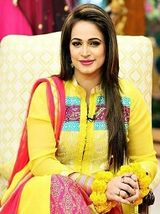 
Noor Bukhari is one of  Pakistan’s multitalented celebrities. Her real name is Sonia Mughal. Besides being an actress, she is a host, model, and director who worked both on television and films and hosted numerous shows. Noor has always been a part of the headlines because of her marriage and divorce scandals. This article has all the information about Noor, including Noor Bukhari Biography and Noor Bukhari Family. Noor took up the acting profession in her childhood. She was starred in the films made in the middle of 1990s as a child. Noor played various roles in numerous plays incorporating Neeli, Reema, etc. Then she started appearing in lead roles. In 2000 she got a chance to work with Reema Khan, Shah Shahid, Barbara Ali, Javed Sheikh, Atiqa Odho in a movie Mujhe Chand Chahye. This film turned out to be a blockbuster. Her success journey began after this movie. Due to some personal issues, Noor took a break at the peak of her career. She rejoined the industry with a new film ‘Zill-e-Shah’ in 2001. A hard life has led Noor to Islam. Now she has given up acting.

Bukhari was born on 3rd July 1988 in Lahore. Currently, she is living in the same city with her family.

Noor is the daughter of Sheeraz Bukhari and sister of Faria Bukhari. Faria is a notable name in the Showbiz industry who first time appeared in a Pakistani movie ‘Ishq Positive’ which was directed by her sister Noor. Noor is the mother of a daughter named Fatima who was born from one of her husbands.