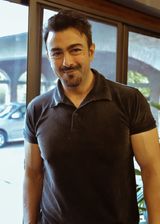 Shaan is a Pakistani actor, writer and director. Upon making his debut in Javed Fazil’s Bulandi alongside Reema Khan, Shaan has acted in numerous commercially successful films and has established himself as one of the critically acclaimed leading actors of Pakistan.[1] Pakistani actor –  Shaan Armaghan Shahid was born in Lahore to the well-known director Riaz Shahid and television, theater and film actress Neelo. His father was whereas his mother was Christian. He himself is a practicing Muslim. His paternal uncle Fiaz Shahid was a cameraman and producer for PTV in Islamabad. He started out his early education at the prestigious Aitchison College.[2] Armaghan Shahid –  Born in Lahore His first acting venture came out at a boy scouts bonfire. He won the best actor’s award in a play called Alif Noon, playing a comedy character but never took acting seriously as a career. After leaving Aitchison, he left for New York, United States and joined Newtown High School. Dreaming of becoming a lawyer due to his extraordinary talent of convincing people, he always thought he had a talent to become a lawyer. He stayed in New York for 7 years and then returned to Pakistan for vacation where he took up the family business, Riaz Shahid Films. At the age of 17, he did his first film as a debutante in “Bulandi” which was released in 1990 & was a huge success.

Shaan was born into Punjabi family. His father Riaz Shahid was Muslim but her mother belongs to Christian family who embraced Islam. His father started his career in 1962 with movie Susral. His father has written several hit movies such as Yeh Aman,Frangi and Zarqa. That’s why the understanding and devotion to the medium came to Shaan naturally. Once in an interview Shaan said about his father “The ideological DNA has to be carried through the generations from father to son or mother to daughter”. His mother was also famous actress known as “Neelo”.[3] Punjabi family –  Shaan Shahid He was married to Amina Shaan. They are blessed with four daughters. Their names are Shaan has got success in every field of showbiz.  Shaan has also joined Geo Television Network and hosted a morning show named as “Geo Shaan Say”. His show was most seen at that time. Shaan soon left TV and focused on film development. Since he has not any plan to join TV network.[4] Joined Geo –  Television Keep on making a difference Shaan has decided to launch himself as a director.[5] Directed –  Pakistan Firstly he directed his ambitious project Guns and Roses. Then he directed IK Junoon which was released in 1999, other starrers in movie are Resham, Faisal Rehman and Meera. It was written by Pervaiz Kaleem. In 2000 he directed a very good hit named as “Mujhe Chand Chahiey” starring himself,Noor, Reema Khan, Moammar Rana,Javed Sheikh and Atiqa Odho. He then directed “Moosa Khan” which starred Saima, Abid Ali, Jan Rambo and Noor. Bulandi was hit film. It was followed by Nageena in which he has acted opposite Madiha Shah. He has also given many hit films. At one time Shaan is considered as sign of success in films. The films which have hit are as follow[6] Bulandi –  Hit Film As Shaan is one of the most wanted actors of Pakistan. He is doing work in number of projects. He is working in Syed Noor’s production named “Bhai Wanted”.

Mission5 is also a movie in which Shaan is acting. The good part of this movie is that it is written by Shaan himself. Farhan Tahir an American actor is also part of this project.[7] Actors of Pakistan – Shaan Shahid As Shaan is considered as reason of success of movies, same is case here. He has been brand ambassador of many top brands of Pakistan. He is working with famous “Unilever” Pakistan. Shaan endorsed another mega brand “Pepsi”. Shaan is also brand ambassador of Pakistan’s telecom giant “Mobilink”. Shaan was also the Good will ambassador of “One Pack=One vaccine”. This was the campaign launched by UNICEF, Ministry Of Health and Procter & Gamble. Shaan is also visiting many cities to promote this cause.[8] Success of movies –  Shaan Shaan has also got offer to work in block buster movie of Bollywood “Ghajni” opposite Amir Khan. But he has refused to work in Bollywood. Last year during interview Shan said that “I refused India once.When I read the role, I knew that they needed a new terrorist face  and I said no. In Pakistan I live in people’s hearts. That’s a huge responsibility .I cannot let them down”[9] Shaan has also got offer to work –  Block Buster Movie

Films to His Credit

Till date there are 576 films to Shaan’s credit. Shaan has made his own production company named “Riaz Shahid Films”.

Shaan  startred his career with movie “Bulandi”. After that he hasn’t looked back. He is one of the successful Male actors of Pakistan. He is still going on. He has worked in more than 550 films. Some of his famous movies are Bulandi was hit film. It was followed by Nageena in which he has acted opposite Madiha Shah. He has also given many hit films. At one time Shaan is considered as sign of success in films. The films which have hit are as follow