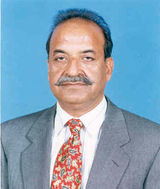 Sardar Mehtab Ahmed Khan is a Pakistani politician and former Chief Minister of Khyber-Pakhtunkhwa from 1997 to 1999 and Federal Minister for Railways in the 2008 PM Yousaf Raza Gillani cabinet.He is politically affiliated with PML-N, where he is the Senior Vice President. He has served as a senator from March 2003, but resigned on March 17, 2008, when he won the NA-17 Abbottabad-I National Assembly seat in the 2008 general election, held on February 18, 2008. Mehtab Ahmed Khan Abbasi passed matriculation from Govt High School Murree and graduated from the Sir Syed School in Rawalpindi. He then went on to do his LLB and practiced in the courts of Rawalpindi, he joined his father Sardar Muhammad Nawaz Khan’s clothing business in Rawalpindi Saddar. His uncle Sardar Sarfaraz Khan had contested local elections but never won and so promoted his nephew Sardar Mehtab in Circle Bakote, who was elected for the first time in 1985 as an independent candidate. He became popular among the people of Circle Bakote and has been successful in every election until now.[2]  Education and Early life He is politically affiliated with PML-N, where he is the Senior Vice President. He has served as a senator from March 2003, but resigned on March 17, 2008, when he won the NA-17 Abbottabad-I National Assembly seat in the 2008 general election, held on February 18, 2008.[4]  Political Party  Elections 2013 Sardar Mehtab Ahmed Khan Abbasi lost his seat to PTI candidate, Dr. Azhar Khan Jadoon. Mehtab bagged 69568 votes in comparison to Dr. Azhar Khan Jadoon who mustered 96185 votes.[5] PTI He won both the National Assembly and provincial assembly seats from Abbottabad in 1990, 1993 and 1997. He missed the 2002 general elections as his government was ousted by military ruler Pervez Musharraf and was sent behind bars in a wheat scandal case. NAB cleared him in the case in 2003. He was elected to Senate in 2003.[6]  National Assembly and Provincial Assembly

Mehtab Ahmed Khan became the 22nd chief minister of the Khyber-Pakhtunkhwa on the 21 February 1997, taking over from Raja Sikander Zaman, and served until 12 October 1999. During his tenure he invested heavily in area of Circle Bakote, a relatively poor and underdeveloped area. During this time, he electrified all of the area, provided facilities such as telephone lines, water supply schemes, link roads, like the Kohala – Moolia road, Sowargali – Boi road, Birote – Berote Khurd, and the Osia – Malkot road. He constructed the Murree – Abbottabad road as a motorway and upgraded high schools in Ayubia, Birote and Bakote.[7]  Political Career He then became a senator in March 2003. He opposed the award of ticket to Sardas Idrees Khan of Karhal Tribe of Galiyat as a candidate of PML (N) to the Ex-Prime Minister of Pakistan, Mian Nawaz Sharif in 2002 general elections, but he won the election as MPA of NWFP Assembly, and joined the Muttahida Majlis-e-Amal (MMA), and was appointed as Provincial
Minister of the Local Bodies Ministry.[9] Senator

Mehtab Ahmed Khan did not contest the general elections in 2002 for National Assembly, and therefore had to settle as a Senator in the March 2003 – March 2009 tenure. In the 2008 general elections, Mehtab Ahmed Khan won NA-17 Abbottabad seat and hence vacated the Senate seat. He also won the PF-45 provincial assembly seat, which he will have to vacate as parliamentarian can only keep one seat. His son Shamoon yar Khan won this seat.[10]  Post-CM Political Career

8 February 2016 The Khyber Pakhtunkhwa Governor Sardar Mehtab Ahmed Khan on Monday tendered resignation citing health issues as the reason for quitting the office.Sardar Mehtab said he had informed Prime Minister  before joining the office that he would not be able to continue for long time as it was a tough and challenging job. He might not do justice to the job as his health was not good, he added.Apart from health, his personnel and social life had also been affected due to this office, .[11]  Resigns as Governor KPK To a question, Sardar Mehtab said he remained in active politics for over 30 years and would certainly ponder over rejoining the politics in future.He said he took full responsibility for all the individual and collective decisions taken during his tenure as governor.Replying to another question, he said he would shift to his ancestral house in Abbotabad as he had no house or plot in Peshawar.[12]  Questions