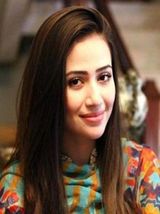 Sana Javed is a beautiful, versatile and accomplished Pakistani actress and a model who is in the industry for a long time and is impressing her fans with her powerful performance. Her brother Abdullah Javed is also a good looking Pakistani Model. This article contains all the information about Sana, including Sana Javed Biography and Sana Javed Dramas. Sana is a stunning and most cherished Pakistani actress and a model who has attained notability and stardom with her hard work and devotion in a short time. She proved herself with her amazing performances one after another which wasn’t a surprise for her fans who welcomed Sana warmly since her first day in the industry when she didn’t have any experience of acting. Sana is a personification of Style, Beauty and talent.

She was born on 25th March 1993 in Jeddah, Saudi Arabia. Later her family moved to Pakistan. Currently, Sana resides in Karachi with her family.

She completed her schooling from the Karachi grammar school and then did her graduation from the University of Karachi. After completing her education Sana stepped into the Showbiz industry to become an actress which she always dreamed of.

She never disclosed her personal information with media though her brother Abdullah Javed is also in this field and is one of the handsome models of Pakistan. Her younger Sister Hina Javed has just joined the Showbiz industry and all set to attain all the love and acknowledgment. This gorgeous young actress is currently single.

Other than an actress she is also a stunning model who has worked with many brands and has walked on ramp several times for various well-known designers. She often do bridal shoots where she looks incredible. She likewise has been seen in various Television commercials as a brand Ambassador also. She has appeared in various music videos including ‘Khair Mangda’ opposite Legendary Atif Aslam.