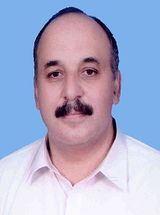 Salim Rehman is a Pakistani politician.Salim was nominated as a member of the National Assembly of Pakistan (MNA) from June 2013.He is associated with Pakistan Tehreek-e-Insaf (PTI). Salim Rehman is highly regarded member of the party Pakistan Tehreek-e-Insaf ( PTI) and a very experienced politician with regards to election.He is the son of Mehboob ur Rehman.He hails from village Farhat Abad, Kotanai, Tehsil Khawazakhela, District Swat.

Salim’s career in politics began when he decided to join Pakistan People’s Party in 2002. He was given the ticket to contest elections in that same year. Being his first experience in the elections, he wasn’t able to win the election and hence couldn’t become a member of National assembly.[1] Career

In the next elections, in 2008, it came as no surprise when he was given the ticket to contest in the elections. This time around too he wasn’t able to win the election and hence didn’t secure his place in the National assembly.

In 2013 when he won the election in NA 30, it didn’t come as a surprise to anyone and thus he finally got a seat as the member of National assembly.To this date he is one of the key members of PTI and his career is on the rise without a doubt after his recent victory.[2]  Election 2013