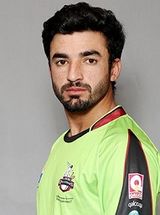 Zafar Gohar is Pakistani bowler who played first time against England on 17 Nov 2015.Gohar batting style is left handed. He is one of the emerging stars of the Pakistani cricket team.Gohar belongs to Lahore Pakistan and also plays for Lahore Qalandars since last two seasons.Now, he is playing for United Islamabad PSL 2018 third season. An orthodox slow left armer, Zafar has come up the ranks by representing Pakistan at every age group level to grab eyeballs of the national selectors.Zafar played in the 2012 and 2014 under-19 world cups for Pakistan. However, 4 wickets from 5 Matches in the 2012 edition and 8 wickets in the 2014 edition were still not good enough to hand him an automatic selection into the national team.Zafar was groomed further and finally managed to have an ODI debut in 2015 against England.[1]  Biography

Zafar played much of his club cricket in the north side of city and was recruited into the Shafqat Rana Cricket Academy, which then allowed him access to the Under-15 circuit. He was selected for the U-15 world championship in West Indies in 2008 and picked up 10 wickets at 17.10. He was also part of two back-to-back Under-19 World Cups from 2012 but he shot to the limelight during a Youth tour to England in 2013. He finished as the most successful bowler, in a tri-series also involving Bangladesh, with 18 wickets at 11.44.

He continued to make inroads back home as well, moving smoothly from Under-15 to Under-19 and then finally won a domestic contract with Zarat Taraqiati Bank Limited, one of the largest departmental teams. He captained the ZTBL U-19 team and was later given an opportunity to play in the senior team and rubbed shoulders with the likes of Saeed Ajmal, Abdul Razzaq, Yasir Hameed. Then he moved to play for State Bank of Pakistan and in 2015 Sui Southern Gas Corporation roped him for the entire season.[2] Domestic Contract

Gohar has been a very consistent performer in the Pakistan domestic circuit across all forms. Not only is he a genuine wicket-taker, but also has the ability to adapt to the nuances of any particular format. It isn’t to score quickly off Gohar as is evident from his economy rates. Even in the shortest format, he only concedes at a shade above 7.5 runs an over while also providing regular breakthroughs. Apart from bowling skills, he is a more than handy batsman who can use the long handle when needed. All this makes him a complete package, be it for white-ball or red-ball cricket.

Gohar could have had a Test debut on the same tour where he played his maiden ODI but reports suggest he had fallen asleep as PCB officials had tried to contact him after Yasir Shah had injured himself. He hasn’t represented Pakistan in any format there after but is definitely on the radar of the selectors as he is considered a long term prospect by many. Considering the queue of a spinners with batting ability in Pakistan, the competition is bound to be stiff but he certainly has what it takes to be ahead of the pack.[3]  Test Debut