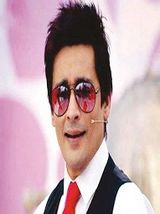 
Sahir Lodhi is an accomplished Pakistani television and film actor, Host, and director who is very popular among everyone. He is known for his hosting skills, for which he has garnered various awards. He is likewise running ‘The Sahir Lodhi Foundation’ while his sister Shaista Lodhi is running her clinic in Karachi. This article has all the information about Sahir, including Sahir Lodhi Biography and Sahir Lodhi Family. Sahir is one of the most talked personalities of Showbiz due to various reasons. He is a talented Pakistani actor, Host, and director who has also worked in Bollywood. He got a massive recognition after his show ‘The Sahir Show Fm 103’, where he invited various celebrities and featured special topics. He is often being mocked for copying Bollywood actor Shahrukh Khan. Sahir also focuses on the Charity work and has established his foundation with the name ‘The Sahir Lodhi’s Foundation’ where he generally emphasizes on Health and Education.

He was born on 21st May 1968 in Karachi. After spending his childhood there, he moved to the USA where he spent 14 years. Currently, Sahir is living in Karachi with his family.

Sahir holds the degree of Masters in Petroleum Engineering that he obtained from the Montana Tech University of Montana. Once, he lied in an interview for doing PHD online from the school of the US.

He was born to Ali Kazim Lodhi and Roshan Gohar Lodhu in a middle-class family. His only sister Shaista Lodhi is an accomplished Pakistani television Host, actress, and Dermatologist who is managing her clinic in Karachi. She is associated with the Showbiz industry as a television host for a long time and indeed included in the list of one of the most cherished television presenters. Sahir is married to Somi Nizami Lodhi and blessed with a daughter Zara Sahir Lodhi.

As an actor, Sahir showed his capabilities in various television shows and a few movies; however, he didn’t get that recognition, and his acting skills didn’t impress people. His debut Pakistani movie ‘Raasta’ opposite Aijaz Aslam, Shamoon Abbasi, and others became a disaster. Apart from that, he has been seen in various television dramas, including ‘Bikharnay Say Pehlay,’ Saheli,’ and others, but those equally failed to impress people.

As a host, Sahir has received enough acknowledgment and praise. People’s reviews for him always mix as a few found him extremely talented while few hate to seem him on screens and calls him an over actor. However, he is the talk of the town in any situation. He has hosted various shows where he invited different television actors. He got a considerable acknowledgment with his show The Sahir Show Fm 103, where he used to take calls from across the globe.