By tauseefanwarMarch 10, 2017No Comments3 Mins Read 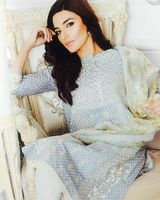 
Sadia Khan is an astonishing Pakistani actress and model who aspired to become an actress and to join the Showbiz since her childhood. She is only a female photographer who has an achievement in the Hollywood arena. This article contains detailed information about her including Sadia Khan Biography and Sadia Khan Dramas. Sadia is a stunning and notable Pakistani actress and model who isn’t seen doing several projects yet whatever she did in all these years is worth applauding. She is one of the bold Pakistani actresses who is known for her bewildering performance as Eman in super hit drama serial ‘Khuda Aur Mohabbat’ and ‘Khuda Aur Mohabbat 2’. Her innocent face and her delightful smile let people fall for her besides her acting. She is unmarried and fully focused on her career.

She was born on 11th September 1987 in Islamabad yet originally she belongs to Sialkot. She often lives in Karachi too for her work.

She holds the degree of master’s degree in business administration that she attained from abroad while she did her masters in Psychology from Lahore. Her early schooling is from Islamabad.

Though the list of her acting projects is smaller yet she has done several modeling projects with various number of notable designers. She has been a piece of various style weeks and bridal couture weeks, for example, Pantene Bridal Couture Week. She has been seen doing several advertisements including Sunsilk.