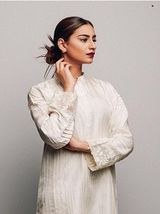 Rehmat Ajmal is a stunning and multi-talented Pakistani Model who can act, who can sing and who can host too. She started her journey in 2015 and became more and more prominent through social media. This article contains all the information about Rehmat Ajmal biography and Rehmat Ajmal career. Did you know that she is a graduate from NCA? Rehmat is a Young and multi-talented Pakistani Model, Theater performer and also a designer who is in the industry a few years ago and became prominent because of her bold and charismatic personality. She belongs to a non-artistic family background but still has won the hearts of millions of people with her diligence and talent. She is one of those artists who want to be an expert in every field whether it’s working or modeling or singing. She is unmarried and fully devoted to her career.

She was born on the 24th of October 1993 in Lahore, Pakistan and still resides there with her family. She often lives in Karachi now because of her shoots.

She is the only one from her family who belongs to the showbiz industry and is the youngest of all siblings. Her elder sister Amnah Ajmal is a certified Chef and also owns Bake Express, takes a trip down memory lane. Indeed talent runs in her genes. She shares a strong bond with her sisters.

Being born in Lahore she received all her education from that city. She did her O’ Levels and A’Levels from Lahore and then went to NCA as a student of Textile designing and did her graduation from there.

Like many other artists, she also became prominent through social media where she used to post her pictures through which different designers contact her and today she is one of the supermodels of Pakistan. She started her career when she was completing her bachelor’s in NCA. She is also blessed with great singing skills which people came to know when she sang in Mazak Raat. She also gave an appearance in ‘The ‘S’ stories by Sophiya Anjum’ where she confidently talked about her depression and anxiety because of trolls on social media.

She is a wonderful and stunning Model who has become prominent in a short time and today she is considered as one of the supermodels of Pakistan who is very passionate about her career and goals and wants to achieve a lot in life. She has that sense of carrying every fashion and every style in a decent way. She got the privilege to work with many prominent designers including Fahad Hussein, HSY, Nomi Ansari and many others and has walked on ramp many times. The girl has indeed a long way to go. She is also an owner of rehstorepk where her own designed clothes are available.