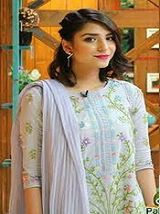 
Ramsha Khan is a beautiful Pakistani actress, model, and host who started her career in 2010 from local television. She started her acting career in 2016, and it wouldn’t be wrong to say that she has enhanced her fan following a lot through her versatile acting in different serials. This article contains all the information about her, including Ramsha Khan Biography and Ramsha Khan Family. Ramsha is a well known and stunning Pakistani Television and film actress and likewise a model who has also worked as a VJ on Television. She is in the industry since 2016 and made her place in this glamour world without having any artistic background. Being born in a liberal family, it wasn’t that difficult for her to join showbiz. She garnered immense popularity after her character Mariam in drama serial ‘Kaisa Hai Naseena.’ Ramsha has a long way to go.

She was born on 23rd June 1994 in Karachi. Currently, she still lives there with her family.

She holds the degree of MBA that she obtained from the Iqra University.

Ramsha was born in a liberal family who shares a very strong bond with her mother Nafeesa Baig. Her only sister Alysha Khan doesn’t belong to Showbiz. She is not married.

Ramsha is indeed beautiful and splendid Pakistani model who has worked with many designers and has done many photoshoots for prominent designer brands. She has been a part of some Television commercials. She is also one of the trendy TV celebrities who knows what to wear and how to carry bold dresses with elegance on different showbiz events.

Ramsha began her showbiz journey as a VJ of a local channel. She is blessed with amazing hosting skills and she knows how to engage and entertain the audience with her charming personality and lyrical voice.