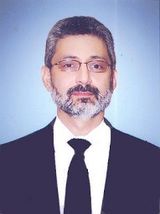 Justice Qazi Faez Isa, a prominent figure of judiciary of Pakistan. He is among the most valiant and just judges of Pakistan with whom the hope that justice will be served to the oppressor is still alive. Justice Qazi Faez Isa was born on October 26, 1959 in Quetta. He belongs to a distinguished family of Pishin. He is the grandson of Qazi Jalaluddin, the Prime Minister of Kalat State, prior to Independence.  The family moved to present Pakistan in 1880s when the tyrant ruler Abdul Rahman imposed a genocidal war against Hazaras killing about 60% of the total population. It is to mention that Hazaras in Pakistan live in Quetta, Karachi, Hyderabad, Nawab Shah, Sangar, Khair Pur, Zhob, Muslim Bagh, Mach, Loraralai, Duki, Sinjavi, Harnae Marvar, Dagari and in some other cities. He now lives in Islamabad with his wife who he’s been married to for 33 years. Both his son and daughter are married and he is blessed with a granddaughter. [1] profile

Justice Isa’s father was the first person from the province to acquire the Bar-at-Law degree and after his return from London helped establish the All India Muslim League in Balochistan and was nominated by Quaid-e-Azam as the President of the Provincial League and had the distinction of serving as the only member on the Central Working Committee of the All India Muslim League from Balochistan. Late Qazi Muhammad Isa was a prominent leader of Pakistan Movement and close friend of Quid-e-Azam Muhammad Ali Jinnah. He sanctioned Voice of Hazaragi in Radio Pakistan in 1975. Qazi Muhammad Isa (Marhoom) raised the voice of deprived Hazaras of Independent Hazarajat in UN for the first time in 1970s and succeeded in getting Hazara delegation in the UN represented by Tanzeem Nasle Nau Hazara Mughul.

Begum Saida Isa, Justice Isa’s mother was a dedicated social worker and worked in an honorary capacity on the boards of hospitals and other charitable organizations focusing on education, children and women’s health issues.

Kaleem Umer, cousin of Qazi Faez, writes in Daily Times that the Isa Famiy belonged to Hazaras of Kandhar, who are predominantely Sunni. Ashraf Jahangir Qazi is the cousin of Qazi Faez. He served as the Ambassador of Pakistan in the United States and India. Currently he is the UN Secretary General’s Special Representative for Sudan.  [2] family Qazi Faez Isa completed his primary and secondary education in Quetta, did his “0” and “A” levels from Karachi Grammar School Karachi and went on to do B.A. (Honours) in Law, from London. He completed his Bar Professional Examination from the Inns of Court School of Law, London. Justice Isa was called to the Bar of England and Wales (Middle Temple, 1982) .

Before Justice Isa’s elevation to the High Court he was a senior partner and head of litigation in one of Pakistan’s leading law firms. He rendered his services as amicus curiae when called upon by the High Courts and Supreme Court of Pakistan and had also conducted international arbitrations. He also served on board of the largest bank of Pakistan, of the Security and Exchange Commission of Pakistan and of the Quaid-e-Azam Mazaar Management Board.

Petition in the Balochistan High Court

His interest in environment and public interest litigation resulted in him successfully assailing the special laws applicable in Balochistan (Ordinance I & II of 1968) on behalf of the Balochistan Bar Association (PLD 1991 Quetta 7). He also filed a petition in the Balochistan High Court with regard to the violation of Quetta Building Code, which resulted in the High Court directing the implementation of the Code to ensure against death and destruction in times of earthquake (PLD 1997 Quetta 1).

Prior to his elevation Justice Isa regularly wrote on the Constitution, Law, Islam and Environment and his articles were published in Pakistan premier English newspaper. He also co-authored the book: “Mass Media Laws and Regulations in Pakistan” and authored the Report: “Balochistan: Case and Demand”.

consultant on a World Bank project

As consultant on a World Bank project he prepared a, “Report on the Legal Aspects of Acquisition of Land for the Proposed Karachi Mass Transit Project”. He was the legal expert on the “Promotion of Private Sector Participation in Highway Financing, Construction and Operation”, and was the legal and environment consultant with regard to a study on “Balochistan Groundwater Resources Reassessment”; sponsored by the Asian Development Bank. He was also part of the consortium engaged by the World Bank to provide services in respect of “Technical Assistance for the Preparation and Implementation of Private Sector Participation in the Karachi Water Supply and Sewerage Sector”.

As professor of law he taught ‘Constitution of Pakistan and the Constitutional History of the Sub Continent’ at Islamia Law College, University of Karachi (till 1994). He jointly wrote and compiled a book on ‘Mass Media Laws and Regulations in Pakistan’ published by the Asian Media Information and Communication Centre, Singapore, which was the first book on the subject. He wrote a booklet entitled, ‘Baluchistan, Case and Demand’ (published by PILDAT, 2007). He has also written extensively on law, environment, Islam, heritage, Balochistan and the Constitution, and his articles have been published in Pakistan’s leading English newspaper.

The Government of Pakistan constituted a Commission of Inquiry to enquire about an alleged plot to assassinate the then Chief of the Lahore High Court, Justice Khawaja Muhammad Sharif, vide notification dated October 1, 2010. Chief Justice Isa served as the Chairman of Commission, which included judges from the Lahore and Peshawar High Courts. The report of the Commission was submitted to the government. The honourable Supreme Court constituted a three member Commission on December 30, 2011 to probe into the origin, authenticity and purpose of creating/drafting a memorandum that was delivered to the chairman of the US Joint Chiefs of Staff Admiral Mike Mullen. The commission comprised of Justice Mushir Alam, Justice Iqbal Hameed-ur-Rehman and Justice Qazi Faez Isa, respectively the Chief Justices of the Sindh, Islamabad and Balochistan High Courts. Chief Justice Isa was appointed as the Chairman of the Commission, which submitted its report to the honourable Supreme Court in May 2012. [3] career

Member of the Pakistan Law and Justice Commission

Elevation to theChief Justice of the High Court of Balochistan.

After the proclamation of emergency of November 3, 2007, he elected not to appear before judges who had violated their oath. Subsequently, after the Supreme Court declared the action of November 3, 2007 unconstitutional, all the then judges of the High Court of Balochistan tendered their resignation, and on August 5, 2009 Justice Isa was directly elevated to the position of Chief Justice of the High Court of Balochistan. At the time of his elevation Justice Isa was the solitary judge in the High Court, he nominated judges all of whom were confirmed and thus reestablished the High Court of Balochistan. He reopened the High Court at Sibi which had remained closed for a number of years, and acquired land for the construction of the High Court at Turbat and approved the design of its building. He then went on to upgrade all the courts in Balochistan focusing on facilitating access and providing facilities to the public. Justice Isa introduced a system of transparent induction of officials and officers in the High Court after advertising such posts.  During his tenure a large number of vacant judicial posts in the subordinate judiciary were filled after advertising them and each applicant had to sit for a series of exams and acquire a minimum pass mark before being invited for an interview. It seems those that are expected to manage and run the state, both elected and career, have utterly failed to discharge their responsibilities as highlighted by Justice Qazi Faiz Esa judicial inquiry report on Quetta carnage. An inquiry commission under the Supreme Court  slammed the federal interior minister, and the Balochistan chief minister and home minister for providing misleading information following a deadly terrorist attack in Quetta which claimed 70 lives and injured as many as 112 people in 2016 . Justice Esa was the chairman of this commission. He commented in report that as custodians of people’s rights, politicians instead of waking up to their responsibility have chosen the easy path of engaging in political point-scoring by asking resignation of a Minister. In other words, they are seeking sacking of an incapable minister to be replaced by another incapable person and consider it enough to once again throw dust in the eyes of the people. [5] Quetta A two-judge bench, comprising Justice Mushir Alam and Justice Qazi Faez Isa, heard a suo motu case on the Faizabad sit-in. Hundreds of Tehreek-e-Labbaik protesters had staged a sit-in at the Faizabad Interchange and blocked it for 20 days. Justice Faez Esa did not hide his anger and concern over the immature behaviour of government plus security agencies. During the proceedings, when Justice Faez Isa inquired whether those killed in the sit-in were Muslims then the attorney general replied with yes. Upon that the judge remarked the Tehreek-i-Labbaik Ya Rasool Allah (TLY)’s sit-in was an ‘attack on Muslims by Muslims’. He said that why the government is spending so much on security agencies, as they don’t know what is happening in the country.He said the ISI is a premier intelligence agency. Justice Faez remarked that it is the responsibility of the security agencies to protect and implement the constitution. Justice Faez remarked that ISI is doing everything but nothing for the people of Pakistan. He said that Pakistan did not come into being due to army, adding it was created due to the struggle of the common people. He also questioned about the budget of ISI. [6] faizabad