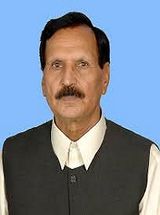 Ghulam Rasool Sahi is a famous politician who has been associated with many political parties. He is the brother of the former speaker of Punjab Assembly Chaudhry Afzal Sahi. Sahi was twice elected as a member of the National Assembly in 2002 and 2013 from NA-75 Faisalabad. This article has all the information about Ghulam Sahi, including Ghulam Rasool Sahi Biography. Ghulam Rasool was born on 9th July 1944 in Faisalabad. Currently, he is still living in his hometown.

In 1964, he completed his graduation in his hometown from Government degree college Faisalabad.

Ghulam Rasool is the son of Chaudhry Nawab Khan, who was a landlord of Sahianwala. He belongs to a Sahi Jat family. His brother, Chaudhry Afzal is also a politician by profession and has served on the key posts and remained a speaker of Punjab Assembly. Zulqarnain Sahi is the son of Rasool Sahi.