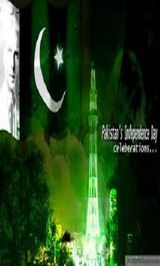 
14th August the day of Pakistan  is a common day for other nations, but this is most valuable day for Pakistani nation in history of Pakistan . In Urdu language it is called as “Yom-e-Istiqlal”. On 14th August 1947 the world saw a new country “Islamic Republic of  Pakistan ” as an independent country. Remember that according to Islamic calendar Pakistan became on 27th of Ramadan when Allah blessed Muslims with the pious homeland.The word “Pakistan” is combination of two words “Pak” means pious and “stan” means homeland. Both words belong to Persian and Urdu language.The Pakistan came into existence due to restless efforts of Quaid-e-Azam  (the great leader) Muhammad Ali Jinnah. Muhammad Ali Jinnah proved to be a great leader and his name has been written in golden words in the history of  Pakistan .14th August is a public day of dedication and pride for the people throughout Pakistan and celebrated with great enthusiasm and devotion among the nation. The main celebrations of this day are flag hoisting, singing patriotic songs, tributes to the national heroes and cultural activities. The importance of this day lies in paying tribute to the lost heroes and in raising the hopes for a bright future. All children and girls feel happy and filled with emotion on this day. They participate in events and express feelings.
Being a Pakistani we must celebrate 14th August by thanking to All Mighty Allah for giving this homeland after immense sacrifices.[1] Pakistan Independence Day Subcontinent was remained British colony from 1847 to 1947; Muslims was the rulers before the British raj and suffered after the war of 1857 against British, many great leaders such as    and  Sir Syed Ahmed Khan  Molana Muhammad Ali Johor work hard for the Muslim’s people political advancment.

In 1885 All India National congress was founded, Major Muslim political leaders, including Muhammad Ali Jinnah, were members of the Indian National Congress and worked towards Hindu-Muslim unity and India’s independence, but soon they realized that the Hindu are never serious with Muslims they never see the improvement of Muslimsancement.In 1906 All India Muslim league was founded, there were growing demand from an independent state of Muslims in India. In 1930 the great Alama Iqbal give the idea of a separate Muslim state which is geographically consist a Muslim state in India.

Strong Hindu nationalism is the major cause of Two Nation Theory, an ideology that is accredited as being the basis for Pakistan’s creation. In 1940 the Pakistan Resolution was passed in Lahore demanding greater Muslim autonomy in British India.

After World War II, it was expected that the British colonies would soon fragment. The  Pakistan  Movement which I headed by Muhammad Ali Jinnah, resulted in creating a Muslim state. Pakistan gained independence from the British rule on August 14, 1947.[2] History of Pakistan independence day People all over Pakistan celebrate Independence Day with patriotic zest. Many people who attend the Independence Day parades dress up in green and white, which are the Pakistani flag’s colors. People visit national monuments and places of national significance to celebrate Independence Day. This is also a time to meet relatives, exchange gifts and visit recreational spots.
Pakistan’s national flag is hoisted on public, private buildings, residences and monuments at dawn. Official buildings, including Parliament House, are decorated and colorfully lit. The prime minister and president address and congratulate the nation and talk about the day’s significance. Streets and houses are decorated with candles, oil lamps and pennants. Firework shows are put together on the eve of Independence Day.[3] Pakistan independence day what do people do
Pakistan’s Independence Day also pays homage to people who devoted their lives for Pakistan’s freedom movement and made sacrifices to attain Pakistan’s independence. A change of guard takes place at national monuments, including the mausoleums of Muhammad Iqbal, who was a poet, philosopher, and politician, and Muhammad Ali Jinnah, who is considered by many as Pakistan’s founder and Quaid-i-Azam (supreme leader).
Events held during the day include special theatre shows, national song competitions, concerts, and Independence Day pageants. Radio and television stations broadcast national songs and specially prepared Independence Day programs.

Independence Day is an official holiday in Pakistan on August 14. All governmental, non-governmental offices, organizations, educational institutions, post offices, and major markets are closed.Public transport remains unavailable on all major routes. Traffic congestion is common due to Independence Day parades. Former Prime Minister Chaudhry Muhammad Ali published a book The Emergence of  Pakistan , a semi-autobiographical account, in 1967. An Urdu translation of the book, titled Zahoor-i-Pakistan, was produced by Bashir Ahmed Arshid. An excerpt on page 287 of Zahoor-i-Pakistan reads:

Chaudhry Muhammad Ali published his book 22 years after Independence, and he lived on until 1980, but he never withdrew his assertion about the date of Independence, though it was during his lifetime that  Pakistan  began to celebrate the Independence Day on August 14, instead of 15, every year.There is another authentic source to verify the fact that Independence was gained on 15th August and not on 14th: A collection of speeches by Muhammad Ali Jinnah published in 1989, by The Directorate of Films and Publications, under the Ministry of Information and Broadcasting.[4] Chaudhary Muhammad Ali The collection, titled Quaid-e-Azam Mohammad Ali Jinnah: Speeches and Statements as Governor-General of Pakistan 1947-48, includes a speech under the heading “Peace Within, and Peace Without” on pages 55-56. The speech follows a short introduction, and the first few lines read thus:
“Message to the Nation on the occasion of the inauguration of the Pakistan Broadcasting service; August 15, 1947.
“Inaugurating the Pakistan Broadcasting service on August 15, 1947,   Quaid-e-Azam   Muhammad Ali Jinnah  issued following message to the nation:
“’It is with feelings of greatest happiness and emotion that I send you my greetings. August 15 is the birth day of the independent and sovereign state of Pakistan.'”

Why is Independence Day significant in history of Pakistan

The regions which now form the Islamic Republic of Pakistan were historically part of India. The idea of creating an independent Pakistan took shape following the events that occurred during the British rule. The political history of Pakistan began with the formation of the All India Muslim League in 1906. The League was a political party which was formed to protect the interests of the Muslims in India. Soon the league started to advocate the establishment of a Muslim nation, to ensure that the Muslims were not neglected in case the British allow self-governance.In 1940s Muhammad Ali Jinnah, the founder of  Pakistan , championed the Two Nation Theory, which demanded that the colony of British India be divide into two countries based on religious demographics. Eventually, the nation of Pakistan was born with two united wings East and West Pakistan on August 14, 1947. East Pakistan, seceded from Pakistan in 1971 following a civil war, and became present day Bangladesh.[5] Why is independence day significant in history of pakistan

What the flag of Pakistan represent

The flag of Pakistan was adopted on August 11, 1947. It was approved in the meeting of the Constituent Assembly which also functioned as the country’s first parliament. The flag continued to be used by the present-day Islamic Republic of Pakistan. The flag is inspired by the flag of All India Muslim League, and it is the creation of a designer named, Amiruddin Kidwa.

The Pakistani national flag features a green backdrop with a vertical white strip on the hoist side, and a crescent white moon with a five-side pointed star. The green field represents the Muslim majority of the country, while the white strip on the hoist side symbolizes the religious minorities, and the virtues of peace and integrity. The crescent moon and star are the symbol of progressive essence of Islam.

The national flag of country is referred to as Parcham-e-Sitara-o-Hilal in the national anthem, which means the “Flag of crescent moon and star.” The flag is hoisted on many special days including the Republic Day, Independence Day, and every year on March 23 when the government calls for a display of flag at full mast in recognition of the Lahore Resolution of 1940 and the Declaration of Republic of Pakistan in 1956.

Who wrote the national anthem of Pakistan All major public and private buildings, roads and avenues have been decorated with illuminations, national flags, posters, and banners for the Independence Day festivities.
The day dawned with special prayers in mosques for the progress and prosperity of the country, followed by thirty-one gun salute in the federal and twenty-one gun salute at the provincial capitals.The main event of the day was the flag hoisting ceremony at the Convention Center in the federal capital Islamabad. President  Mamnoon Hussain , the chief guest at the event, also addressed the nation on the occasion.Mobile phone services remained suspended in several parts of Islamabad, Karachi , Lahore,  Quetta , and other high-security areas in major cities – a step taken to ensure security on the occasion of the country’s Independence Day.Although mobile services were partially restored in some cities including Karachi and Lahore.Cellular services are expected to remain blocked till 2 PM in other parts of the country.
Meanwhile, a change of guard ceremony was held at the mausoleum of the national poet  Allama Muhammad Iqbal  this morning, while flag hoisting ceremonies were also held at important national buildings and institutions in the provincial capitals.    Coincidentally, the Pakistani cricket team was on the verge of gifting the nation with victory in a Test match in England, the country’s former colonisers.[7]Pakistan celebrate 70th independence day