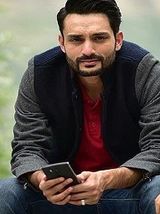 
Osama Tahir is a talented Pakistani actor and a model who is the part of this industry since 2017 yet has amazed everyone with his amazing performances in each serial. Before joining the Showbiz he remained the Marketing executive at Radio1 FM91 and Former Marketing Manager at Gloria Jean’s Coffees Pakistan. This article contains a blend of information about him including Osama Tahir Biography and Osama Tahir Dramas. Osama is a handsome Pakistani actor and a model who is establishing himself in the Showbiz Industry since 2017. Though he is new in the industry yet the few dramas where he gave his presence are worth admiring and worth appreciating. He has made so many fans in a few years with his talent without having any artistic background. The performing artist is well known for his acting, enchanting and great looking style. This handsome young man is still single and has no plans for marriage yet.

He holds the degree of Masters in Marketing that he attained from the Institute of Business Management.

Like many other actors he too gave the start to his career with Modelling and later he stepped into the acting field. He has worked with many best brands and style fashioners of Pakistan. He has done numerous photoshoots as a model and he has worked in TV advertisements as well. His sharp and classy looks made it very easy for him to become a supermodel.