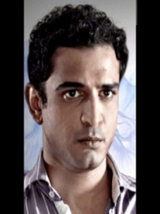 Daniyal Raheel is a talented Pakistani actor, model and a director who is the part of this industry since 2010 and is impressing his fans with his remarkable performances. He is a son of legendary Seemi Raheel and brother of beautiful Mehreen Raheel. This article contains all the information about him including Daniyal Raheel Biography, Daniyal Raheel Family and Daniyal Raheel Dramas. Danial Raheel is a handsome Pakistani actor and a model who is establishing himself in the Showbiz Industry for a long time. Though he is not seen much on the screens yet those few dramas where he gave his presence are worth admiring and worth appreciating. He has worked as an Assistant Director at HUM Tv likewise Marketing Consultant at Paparazzi Magazine. The performing artist is well known for his acting, enchanting and great looking style.

He was born on 5th January 1983 in Lahore where he spent all his life. Currently, he resides in the same city with his family.

He is one of those actors who have actually studied acting and film making before making it their profession. He did his early studies from Lahore College of Arts and Science. Later he went to Beacon house National University from where he completed his bachelors in Film, Theatre, and Television.