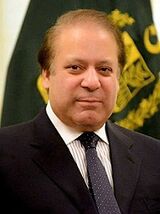 
Nawaz Sharif has remained three times the Prime Minister of Pakistan. His administration was mostly seen focused on the economic revival of the country. Sharif has also served as Chief Minister of Punjab twice. His political rivals were Benazir Bhutto, Asif Ali Zardari, and Imran Khan. He is the longest-serving prime minister. This article has all the information about Nawaz, including Nawaz Sharif Biography and Nawaz Sharif Family. Sharif got his early education from St. Anthony’s High School. He later graduated from Government College and studied business and completed a degree in Law at the University of Punjab.

Nawaz Sharif was born on 25 December 1949 in Lahore, Pakistan.

During his first tenure, the paramilitary operation in Karachi was conducted that became one of the worst periods in the history of Karachi. It erupted in violence and caused the economy to halt. He could not complete his tenure as the government was dissolved by the president Ishaq Khan, but till then, he had emerged as a key figure in the democratic system. After the government was dissolved, Sharif served as the leader of the opposition in the National Assembly from 1993 to 1996.

Sharif was unlucky again that he could not remain the Prime Minister even in his third term. In the Panama Leaks, Sharif was named having concealed assets along with other people in the world. Soon Khan took it to the streets, and later Supreme Court took the notice. After the investigation, Sharif was disqualified in 2017 for not being honest, and the court-ordered to file a reference in the NAB as well. He could not also participate in the elections.

In 2018, he was sentenced to 10 years imprisonment, along with Maryam Nawaz and Captain Safdar in Avenfield reference. He showed himself as a responsible citizen and returned from London to offer himself in custody. In 2019, the government offered him bail on medical grounds only if he indemnity bonds. In November 2019, Lahore High Court asked the federal government to remove his name from the Exit Control List and granted him bail for four weeks on medical grounds. He also assured the court in an undertaking that he would return if the doctors allowed him.