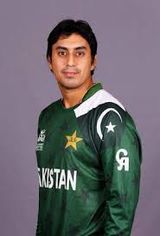 Nasir Jamshed came into Pakistan’s international side in the year 2008 and made his mark on the side by playing some decent ODI innings as an opener. Jamshed was very successful in the limited-overs format, but he could not play up to the expectations in Tests. He got famous in the crowds and fans after his excellent batting performances against India in the 2012-13 bilateral series of Pakistan and India. He had a controversial end to his career as he recently banned from playing any cricket for ten years because of spot-fixing. This article has all the information about Nasir, including Nasir Jamshed Biography. Jamshed was born on 06 Dec 1989 in Lahore, Punjab. Currently, he is still residing there.

He did his matriculation from his hometown in Lahore.

He got married to Sumaira Afzal in the year 2014 and is blessed with a daughter.

Nasir was a very young boy when he started playing professional cricket as he was from the hub of cricket, Lahore. At the age of 15 he did his first-class debut and soon given a chance to play under-19 cricket. He made 204 runs in his debut in cricket under-19 against Sri-Lanka, which shows how good batsman he was from the start of his professional career.

He played for local as well as foreign teams in the T20s and played in 111 domestic T20 games and scored a total of 2431 runs, with average just over 24. He had a decent T20 strike-rate of 122.71 in this format. Apart from Pakistan, Nasir played for various teams in all formats, including Pakistan under-19s, Lahore Lions, National Bank of Pakistan, Lahore Region Blues, Trinidad & Tobaccos, Red Steels and the rest.

Jamshed was part of the Pakistani team in the world cup 2015. He struggled a lot in the tournament and was unable to play the bouncers well. The competition held in Australia, so the pitches offered a sharp and extra bounce for the pacers. He failed to pull the ball with control as he was dismissed three times in a single figure and excluded from the playing XI.

He is known for his batting in the limited-overs format as he was not a success in tests. He also played T20 internationals for the national side. Nasir made his T20 Debut for Pakistan on 12 Sep 2012 against the Australian side. He was selected before the T20 world cup 2012 and was part of Pakistan’s T20 world cup squad in 2012. He gave Pakistan some good starts in the tournament playing top of the order. Jamshed also scored a decent half-century against the Aussies in that tournament.

Nasir alleged to have fixed some matches in the BPL 2016 and PSL 2017 seasons. He alleged to work with the bookies, and after the investigation held in the UK, Jamshed recently banned from playing any form of cricket for ten years and jailed for fixing.